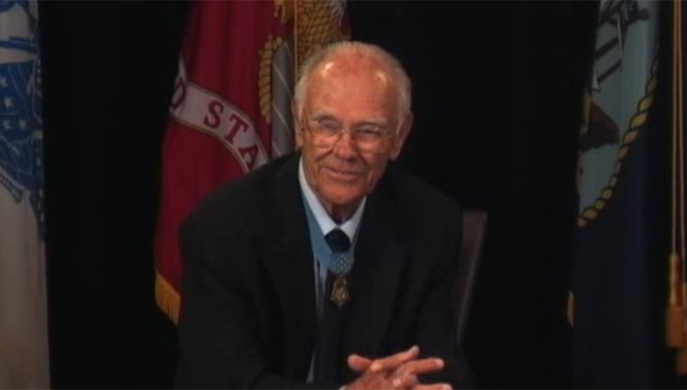 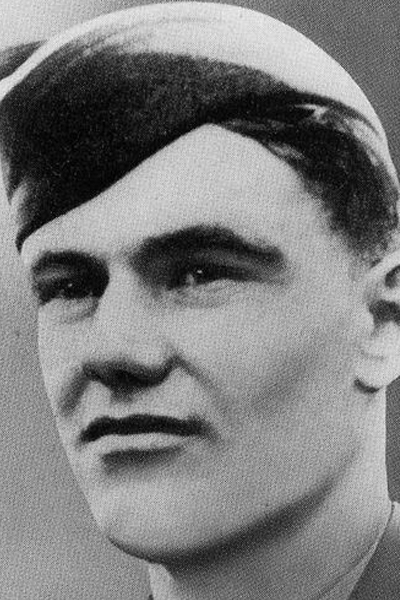 For more than 65 years, he has carried a message wherever he goes. In World War II, the messages were between the command post and the front lines. Since then, the message has been from a generation of veterans to all who have followed in their footsteps: courage.

Robert Maxwell’s service spans nearly the whole American involvement in the war in Europe. Assigned to the 7th Infantry Regiment in 1942, he landed in North Africa, Sicily, Salerno, and Anzio. As a technician fifth grade, his primary duty was to string and repair communications wire between command and the front lines, frequently under enemy fire; so heavy were the wire and his tools that he could only carry a .45 pistol. He was severely wounded at Anzio in January 1944, where he earned the Silver Star for tenacity and total disregard for his own safety, but rejoined his unit for the invasion of southern France in August of that year.

On September 7th, near the Nazi-occupied village of Besancon, Maxwell set to work. By nightfall, he had already earned a second Silver Star for climbing from roof to roof, under intense machine gun fire, to lay a series of critical overhead wire crossings. Shortly after midnight, Nazi forces broke through American forward positions and began to advance on the small farmhouse that served as headquarters, supported by machine guns, anti-aircraft weapons, and explosives. Maxwell held them off with his pistol for as long as possible. When an enemy grenade landed at the door of the command post, his first thought was to grab it and throw it away, to protect the officers inside. His second thought was that there wasn’t enough time to do anything other than smother the grenade with his own body. And his third thought didn’t come for a long time after.

Maxwell received the Medal of Honor in the hospital on May 12, 1945. After he was discharged, he enrolled in school and later married his sweetheart, Beatrice – a telephone operator. Maxwell himself switched to automobile mechanics, which he taught for nearly four decades. Now retired, he lives in Oregon and sponsors college scholarships for Junior ROTC students in that state.

His Citation Reads:
For conspicuous gallantry and intrepidity at risk of life above and beyond the call of duty on 7 September 1944, near Besancon, France. Technician 5th Grade Maxwell and three other soldiers, armed only with .45 caliber automatic pistols, defended the battalion observation post against an overwhelming onslaught by enemy infantrymen in approximately platoon strength, supported by 20mm. flak and machinegun fire, who had infiltrated through the battalion's forward companies and were attacking the observation post with machinegun, machine pistol, and grenade fire at ranges as close as 10 yards. Despite a hail of fire from automatic weapons and grenade launchers, Technician 5th Grade Maxwell aggressively fought off advancing enemy elements and, by his calmness, tenacity, and fortitude, inspired his fellows to continue the unequal struggle. When an enemy hand grenade was thrown in the midst of his squad, Technician 5th Grade Maxwell unhesitatingly hurled himself squarely upon it, using his blanket and his unprotected body to absorb the full force of the explosion. This act of instantaneous heroism permanently maimed Technician 5th Grade Maxwell, but saved the lives of his comrades in arms and facilitated maintenance of vital military communications during the temporary withdrawal of the battalion's forward headquarters.