Despite not meeting height requirements, Eva Jacques (nee Romero) was accepted into the WAC.

This was largely because she was billingual and had completed three years of college. Rather than go through officer commissioning, which was offered her, Jacques requested overseas duty as an enlisted soldier.

She was sent to the Philippines where the camp's living quarters were tents set up on cement slabs with a bare army cot and mosquito net. No pillow, no blanket, no sheet. It was so hot she often took three showers a day to wash away the sweat and grime. She thought herself lucky to have running water, but had little fresh food, eating only dehydrated or canned supplies.

Although Hispanic-American, Jacques never experienced any racism while in the WAC. Her heritage is part of what made her so valuable. Spanish was the official language of the Philippines. Jacques was kept very busy translating everything from top-secret communications for officers to censoring mail written in Spanish.

Jacques remembered fondly that she had "lots of boyfriends," and that despite being fairly remote, the camp still had dances every night, using a hand-crank record player. She became engaged at one point, but her fiance was killed in a plane crash. She found it was safer to just have fun without forming too close of an attachment. 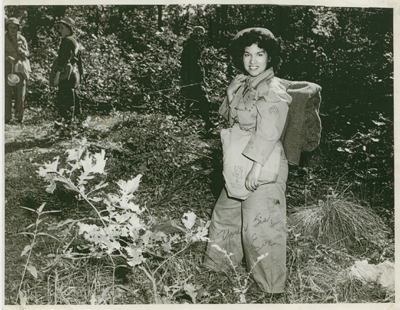