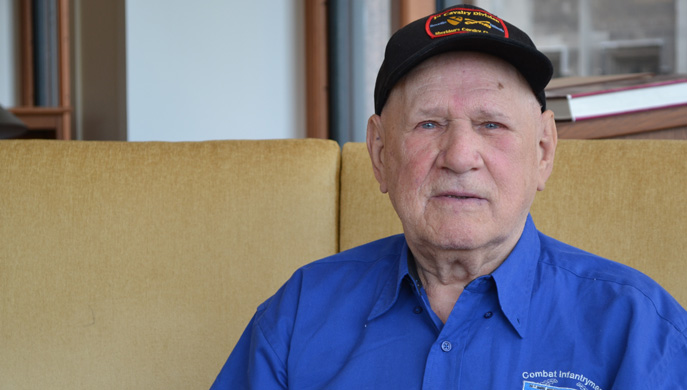 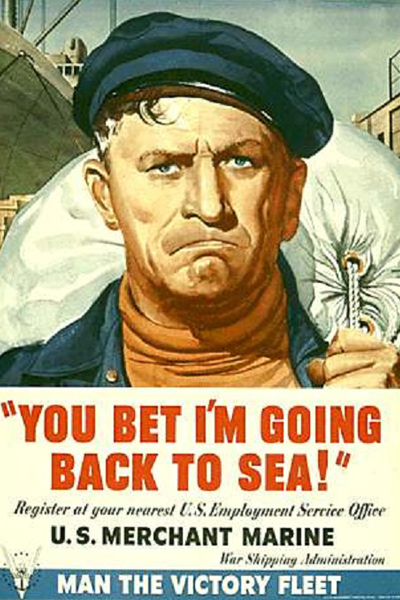 In 1944, Mr. Hoffman signed up for the Merchant Marines, where he ended up helping support the war effort to the conclusion of World War II,  often operating in dangerous conditions with little means of protection. But Mr. Hoffman’s service to the cause did not help him avoid being drafted into the Army during the Korean War, as a part of the 45th Infantry Division.

Born in the far Western Suburbs in 1926, Robert L. Hoffman grew up in the shadow of the Great Depression. He moved around a lot, and took on several odd jobs even as a kid—including killing chickens—before dropping out of school. Tired of the routine of working at Jewel, a Chicago grocery chain, a young Hoffman jumped at the chance to join the Merchant Marines in order to find adventure on the ocean after a friend, and fellow Merchant Marine, told him all about it.

By his own description, the Merchant Marines were not so far removed from the Jolly Rogers and the buccaneers depicted in folklore; it had evolved, certainly, and there were rules of operation and a union organization that handle them. After signing up in Chicago, Mr. Hoffman was taken to Sheepshead Bay, Brooklyn, for maritime training. His first run was for the United Nations World Relief, going down to the West Indies with the goal of hauling back 10,000 tons of sugar. On these runs, he and his fellow sailors would also take returning troops from the ETO—European Theatre of Operations—back to the United States, and then load up on supplies and head back out, with something to go to different places. The Merchant Marines were also assisting the U.S. Coast Guard and U.S. Navy more regularly, going on missions to look for U-Boats in the area, and with those branches putting men on the Merchant Marine’s ships to handle weapons. Mr. Hoffman recalls that “in the early part of the war, the merchant ships were not armed. They were just sitting ducks. The U-boats used to surface and just shell them because they couldn’t fire back.”

After completing his time in the Merchant Marines, Mr. Hoffman returned to the Chicago area and went back to work at the grocery chain—only to be drafted by the U.S. Army, and sent down to Camp Polk, Louisiana. He was placed with the 45th Infantry Division, a National Guard unit out of Oklahoma, and after a new round of training very different from preparing for life on the sea, was sent to Korea. Towards the end of his time in Korea, Hoffman’s unit was put in the area more or less in center of the line near Chorwon Valley—also known as “Old Baldy.” There he experienced three attempts by the Chinese to overtake that area from July 3rd to July 4th, 1952, but managed to hold them off and keep them from being successful in their assaults.

Despite being drafted after already serving his country, Mr. Hoffman maintains a strong sense of patriotism and still believes that service in the military provides an opportunity to give back.