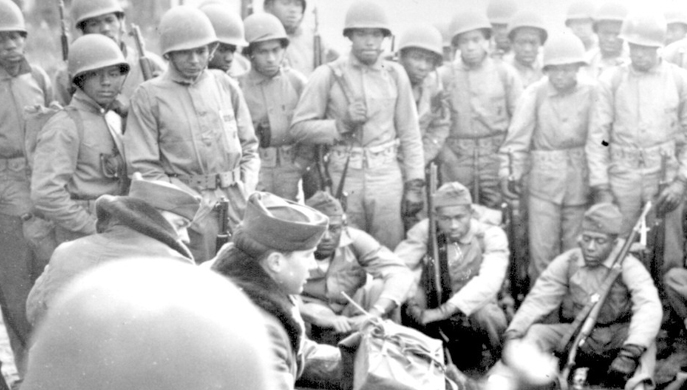 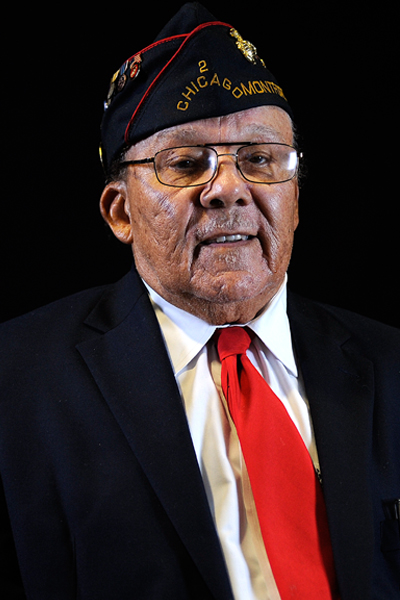 Despite a life bombarded by constant hardship, Edwin Fizer’s strength of heart, depth of character, and unmatched determination paved his path to forge a triumphant legacy. As one of the first black marines trained at Montford Point in Jacksonville, North Carolina, he and his comrades set their minds to proving their commanders and country wrong with their ability to be phenomenal marines. Fizer would serve in the Pacific theater during World War II, and after the war as an officer for the Chicago Police Department [CPD].

Fizer was born in New Orleans, Louisiana, in 1925 where he experienced racial prejudice throughout his upbringing. He became fascinated with flying as a child, and when the war broke out, he tried to contribute by joining the Army Air Corps but was turned away, owing to his skin color. When he heard about the Marine Corps accepting blacks to enlist, he took that opportunity at the age of seventeen. He recounts the colonel saying on the first day of training, “When I see women, dogs, and you people in the Marine Corps, I know there’s a war going on.” The commanders at Montford Point treated Fizer and his fellow black comrades poorly during training, trying to get them to call it quits, but the berating only strengthened these new marine’s resolve. The Montford Point Marines would go on to break several Marine Corps records throughout their training. When the 51st Composite Defense Battalion was ready, Fizer was selected to remain in North Carolina to help train the 52nd Defense Battalion, the second all-black marine battalion.

Fizer was deployed to the Pacific in 1943 after legal support in Washington, D.C., pushed for them to fight. Fizer and his battalion started in the Marshall Island campaign with anti-aircraft defense but would go on to participate in the Mariana Island campaign’s, taking part in landings on Majuro, Eniwetok, and Kwajalein. Most of his day was spent on patrols in the Pacific jungles. After Okinawa, he would serve the rest of the War on Guam where he would come in contact with Japanese prisoners of war. Though half-way around the world, Fizer and his men never escaped racism and were treated the same way they were back at home by the island inhabitants. Fizer left the Pacific in 1945.

After returning home from the war, Fizer attended college thanks to the GI Bill after receiving his GED, but a college degree did not help his chances at landing a job State side. “For eight years after I got out of the service, you know who my companion was? A whiskey bottle,” he recounts. Fizer would struggle until he got a job with the Chicago Police Department in 1953 and would serve in a myriad of roles for ten years, most notably protecting Dr. Martin Luther King Jr. on his several trips to Chicago. After leaving the force, Fizer briefly worked as a teacher with difficult youths in Chicago’s South Side and also helped found the Montford Point Marine Association, turning it into a national organization. Unfortunately, in 2019, Chicago’s South Side chapter is facing a possible closing of its doors and help from the public would be welcome.

Fizer is married, has six children, several grandchildren, and is an active member in his community. Fizer frequently attends PTSD meetings, which he is thankful for because he and his fellow veterans received little-to-no psychological aid after the war.

Fizer’s story is littered with trials, whether experienced as a marine or after. His life showcases what one can accomplish with perseverance and resolve. His service in the Marine Corps and the CPD demonstrate his courage, and those experiences crafted his character and helped him throughout his life to combat the adversity facing him and the black community.