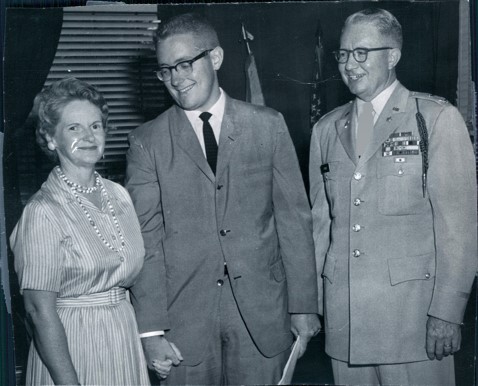 As a doctor in the U.S. Army during the Vietnam War, Dr. Lewis Flint participated in more than 400 operations, learning and healing as a member of the 71st EVAC [Evacuation] as well as Alpha Company, 4th Medical Battalion, and Bravo Infantry, 1st Medical Battalion.

Dr. Lewis Flint’s involvement with the military began early in his life. Born in Atlanta, Georgia, Dr. Flint was the son of a colonel. Due to his father’s position, Dr. Flint moved around a lot during his childhood to states like Pennsylvania and North Carolina. He decided to enter Duke University for medical school after being introduced to the school through their rivalry with his father’s alma mater, the Georgia Institute of Technology. Because of a requirement that doctors to join military or public service after receiving their degree, Lewis began his career in the U.S. Army in 1967 as a 2nd Lieutenant after two years of surgical residency.

After training at Fort Sam Houston in San Antonio, Texas and at Fort Bragg, North Carolina, Dr. Flint shipped to Vietnam in January of 1968. He was first assigned to the 71st EVAC [Evacuation] at Pleiku Air Base. Dr. Flint participated in 430 operations in the six months he was at Pleiku, including patching up injuries sustained by soldiers during the Tet Offensive. After that, he was assigned as Commander of the Alpha Company, 4th Medical Battalion and then Bravo Infantry, 1st Medical Battalion in the 1st Infantry Division. After his tour in Vietnam, Dr. Flint returned to Fort Belvoir, Virginia in 1969, where he studied anesthesiology before being discharged. In his interview he describes how upon returning to the United States, he faced protestors at the San Francisco International Airport: “The welcome we got from a lot of people was: the war was your fault.”

Influenced by his experience in the military, Dr. Flint returned to school to be a trauma surgeon, studying at Medical University of South Carolina and then interning at University of Southwestern Texas. In 1974 he became the first director of the Johnson County Emergency Medical Services System before working at the Louisville General Hospital at the University of Louisville. At the time of this interview, Dr. Flint was the editor for the American College of Surgeon’s journal, Selected Readings in General Surgery, and an adjunct professor at Northwestern University.