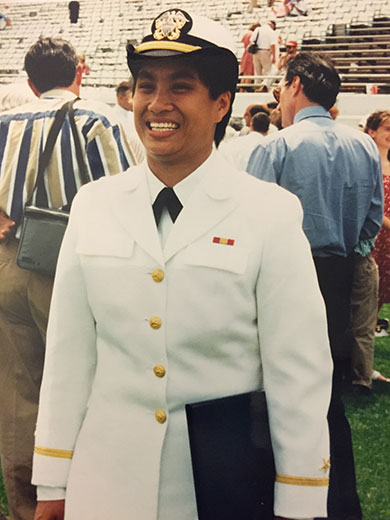 Kimberly Mitchell is a living example of the blessings that can come from tragedy.

In the midst of the Vietnam War, in the spring of 1972, a wounded Southern Vietnamese survivor came upon a crying infant clutching a dead woman, in a village just outside of Quang Tri. The gentleman would bundle the baby in his hat and would stumble onwards towards a bridge south of Quang Tri. The bridge itself was scheduled to be blown up by a South Vietnamese Company to prevent the enemy’s advancement. A South Vietnamese Marine, Bao Tran, took notice of the gravely wounded man, and acting quickly, carried the man over the bridge to save him from the ensuing explosion.

The young man would nonetheless perish from his wounds, but not before begging Bao Tran to take charge of the young foundling. Surprised and unsure, Bao Tran took it upon himself to take the child to the Catholic orphanage, “Sacred Heart” near Da Nang. Bao Tran left the infant in the care of the nuns at the orphanage and gave her the name “Tran Thi Ngoc Bich” or “Precious Pearl” in Vietnamese. American soldiers would regularly visit the children at orphanage for mental respite, dropping off needed supplies and necessities as well. Subsequently, a visiting American airman would take a shine to the infant, and she would come to live with him and his wife in the United States, under the new name Kimberly Mitchell.

From a young age she would be used to being on the move often as her father would be posted at various military bases. But he soon retired and moved the family to Solon Springs, Wisconsin in 1979. She had a happy childhood from kindergarten through high school. Kimberly had the distinction of being the only minority in her community, but she had many friends, played sports in school and even won awards in regional fairs. It was the influence of her military father that led Kimberly to enjoy having a structured life, and the eventual desire to join the military herself.

On a deeper level though, she felt called to give back to those Vietnam veterans to whom she owed her existence to. Initially she had thought of joining the US Air Force in honor of her father, but, eventually, Kimberly eventually decided to study at the Naval Academy Preparatory School (NAPS) in Newport, Rhode Island where she would be given an academic and physical preparedness for the United States Naval Academy. But between her graduation from NAPS and her first year at the Naval Academy, tragedy came to the family through the sudden death of her father back on the farm in Wisconsin.

United States Naval Academy allowed her to take a year to grieve and be reinstated for the Class of 1996. NAPS had indeed prepared her to tackle the intense curriculum and schedule at the Naval Academy, where she took classes towards an Ocean Engineering major. After graduation, as a new surface warfare officer, she did a tour on the destroyer USS Stump (DD-978), out of Norfolk, and served in a unit called Assault Craft Unit 4 (ACU-4), which handled the US Navy hovercraft (LCACS, or Landing Craft, Air Cushion.) Afterwards, Kimberly started working towards a master’s degree through the Navy’s Washington Intern Program, in which service members interned with three high ranking staffs in Washington D.C. for six month terms, while studying for their master’s degree George Washington University.

Through this program, she worked with the Chief of Naval Operations in the Surface Warfare directorate of Readiness Training and Manpower, the State Department as the Iraq Sanctions Officer and point for Middle East peace keeping operations, and lastly in the Pentagon on the Joint Staff. This last internship placed her in the office J-5, Plans and Strategy office, working on Nuclear Arms Control. These positions allowed her to widen her experience with many departments, varied fields of knowledge, and the acquaintanceship of many in domestic and foreign government positions. These internships allowed her to finally attain her master’s degree and also obligated her to serve for another two department head tours. On the first one, she served as operations officer onboard USS Crommelin (FFG-37), and finally the N5, Future Operations Officer, Maritime Security Operations Officer for Commander, Destroyer Squadron 50, forward deployed in the Kingdom of Bahrain.

After Kim’s tour in Bahrain, she returned to Washington D.C. and was assigned to the Navy International Programs Office (NIPO), which primarily handled sale of U.S. military equipment to foreign nations. Initially she was given a portfolio overseeing the Middle-Eastern nations of Iraq, Afghanistan, Pakistan, Bahrain, and Yemen, given her past experience working in the region. Her position early on in State Department had given her a unique perspective during the tragedy of 9/11. The highest rank she achieved during her time was Lieutenant Commander in the US Navy.

Her last two years before she resigned her commission in 2012, were spent working on the Joint Chiefs of Staff in the Office of Warrior and Family Support. Their work involved devising programs and resources for service members, veterans, and their families so that they can re-enter civilian life with relative ease and ample opportunity. Even after her resignation, she helped co-found the Dixon Center. Since her time at the Dixon Center where she was working at the time of the interview in 2013, Kim had also been the President and CEO of Veterans Village of San Diego where she oversaw the care and treatment of homeless veterans in San Diego and in 2020, took a position with National University as the Senior Vice President for Military and Government affairs. Recently, she has taken an offer at the Department of Veterans Affairs.

In the end, Kimberly believes that it is what you contribute to the country you serve and those you serve with, not the medals or awards. She has since had the honor of serving as the chair of the Vietnam Veterans Host Committee at the New York City Veterans Day Parade, and has even returned to Vietnam, to return to her roots and honor those who fought. She was one of the first woman who held powerful positions in the Navy. Kimberly implores younger generations to do the same in their own way, to serve the country that has so benefited them, and learn the stories of those who came before and sacrificed all for our freedom.