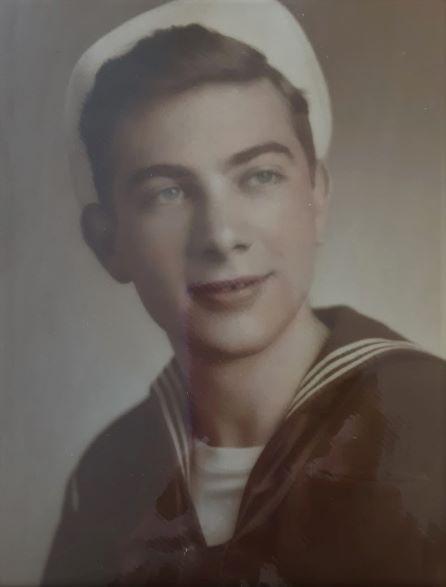 Whether serving in the US Navy after WWII or teaching high school in the civilian world, music and math; camaraderie and culture; tours and travel have been golden threads of Gordon Goldman’s life.

Born in Chicago in 1927, Gordon grew up behind the family shop in Englewood, Chicago where his father, a tailor, and his mother, a seamstress worked. Between his parents and his much older brothers, Harry and Sol, Gordon was protected by the family from the strains of the Depression and cherished.

Goldman studied at Englewood Grammar School and later at Hyde Park High School. Until high school homework became too demanding, Gordon took piano lessons. He also sang in some of Englewood’s theatres. He enjoyed helping fellow students in math and similarly, enjoyed collecting objects that would attract the interest of other children such as photos of movie stars.

Goldman was affected by his brothers’ US Army service during WWII, in particular the difficulties experienced by Sol, who was engaged in combat on the Pacific front.

Goldman was drafted during his first semester at Woodrow Wilson Community College but was allowed to complete his semester. He joined the US Navy, Feb. 6, 1946 partly because he envisioned a gentler service than in the other forces.

Gordon was sent to Camp Perry, Virginia for basic training which lasted three months. Recognizing the importance of service, he was careful about following orders. He learnt how to march, how to shoot, as well as how to swim, largely by the “sink or swim” method.

Next, he was assigned as a yeoman, carrying out administrative tasks in the Communication Division on the newly commissioned heavy cruiser USS Albany (CA-123). He recalls the shakedown in the Atlantic for three months with the ship docking at Boston. At this juncture, Gordon was transferred to a light cruiser, USS Dayton, (CL-105), to Company 73, Division N where he began to work as a Chaplain Assistant, thanks to his piano playing abilities.

This was more like five jobs rolled into one since it involved playing the organ during services, typing up and printing the ship’s bi-weekly newsletter, managing the ship’s library, maintaining sports equipment, and organizing on shore excursions.

While on the USS Dayton, his job changed from Chaplain’s Assistant to Navigator’s Yeoman, typing up navigator reports; his rank rose to that of Seaman First Class in April 1947.

On February 3, 1947, the USS Dayton, disembarked from Norfolk, Virginia on a tour of the Mediterranean. Goldman fondly recalls about fifteen stops in Europe, North Africa and Turkey. He loved being stationed Naples, Italy, for example, one of the ship’s “parking places” where he and his friends would frequent opera, theaters and saloons. They and other US servicemen enjoyed the grateful reception of the Europeans, so close to the end of WWII.

Gordon was discharged on Dec. 11, 1947 and used the GI Bill for education to obtain both his BS and MS in Math and in Education. His career path was that of a math and science teacher in the Chicago Public School system. After his discharge, Gordon returned to live with his parents and brother, Sol. Goldman chose to use his veteran benefits to buy the home in Bellwood to help minimize his father’s commute to work.

He married briefly and was blessed with a daughter, Vivian, and later a son-in-law and grandchildren.

Once bitten by the travel bug in the Navy wanderlust never left him, teaching English to children of the military in Spain, and travelling extensively as reflected by his 12,000 slides.

When asked how the Navy contributed to his life, Mr. Goldman replies:

“Being a citizen soldier helped me grow up and taught me a lot about the wider world and my place in it.”