Reva Gornbein (nee Stem) was one of the final women to join as a member of the WAAC on 6 August 1943.

Like many women, Gornbein was driven by a sense of duty and adventure. “When Pearl Harbor came, I felt that I would not only feel I was performing a duty for my country but I was also interested in seeing the world and I joined”

Gornbein completed basic training in Chattanooga, TN and was stationed at Turner Field, Georgia where she worked as a radio mechanic on attack and bomber planes. She then completed coursework in cryptology, the coding and decoding of messages, and requested an assignment overseas. Gornbein’s request was granted and she served in Germany from July 1945 through June 1946.

Although initially trained in radio mechanics and cryptology, with the surrender of Germany in 1945, Gornbein was reassigned to a new sector of the Army in Berlin. Gornbein was appointed the office manager of the Judge Advocate Section, which was responsible for the court-martial of U.S. servicemen in Germany. Her work in Germany directly after their surrender allowed Gornbein to view firsthand the devastating effects that the war had on the structure and landscape of Europe.

Gornbein travelled from Berlin to Munich where she was to pick up the former secretary. Since the Prisoner of War was a civilian they were not allowed to return to Berlin on an Army plane and instead had to wait for clearance on a cargo jet. While awaiting clearance, Gornbein set out to locate the crematorium at the Dachau concentration camp, finding the ominous building hidden in the woods around the camp. Although Gornbein brought the POW to Berlin for trial she never learned what happened to the man. 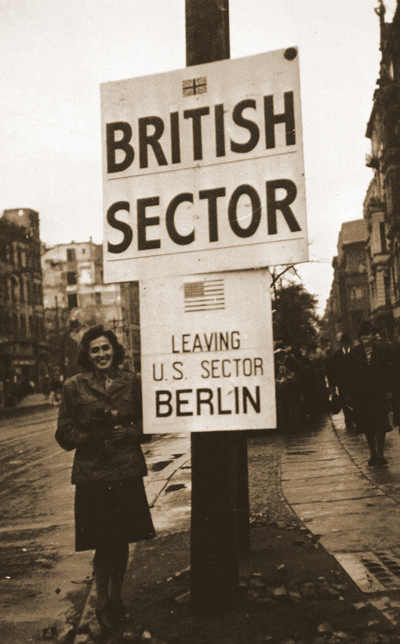