Meg Madsen (née Meyer) is proud to be the only female officer who was authorized to wear the War Department General Staff insignia during World War II.

In May 1942, Meg rushed into the Rochester, NY recruiting station after reading the announcement that the Women’s Army Auxiliary Corps (WAAC) would begin accepting applications to Officer Candidate School (OCS). She was selected for the 6th WAAC OCS Class, and was sworn in August 8, 1942.

Upon graduation from OCS, she was assigned as a Public Relations Officer (PRO) specializing in public speaking. Early assignments included reputation tours to dispel rumors about the newly formed WAAC that were circulating in the general public. Despite her natural skill in public speaking, she desired to go overseas.

In December 1943, she finally began overseas training, but it was interrupted in June 1944 by an official order to report to the Pentagon. Initially disappointed that she would not be continuing overseas with her detachment, she later realized her value at the Pentagon as the Officer in Charge (OIC) of the Classified Conference Center, where the top secret radio telephone, SIGSALY, and radio teletype, SIGTOT messages were received.

As OIC of the conference center, Meg was involved in numerous War Department conferences, including serving as conference aid to President Truman during a conference with General George C. Marshall, Admiral Leahy, Admiral King, General Henry “Hap” Arnold and Winston Churchill, who was in London communicating using the encrypting communication equipment.

Meg was awarded the Legion of Merit at her departure from the Pentagon and active duty, but remained in the Reserves until her mandatory retirement in 1970. 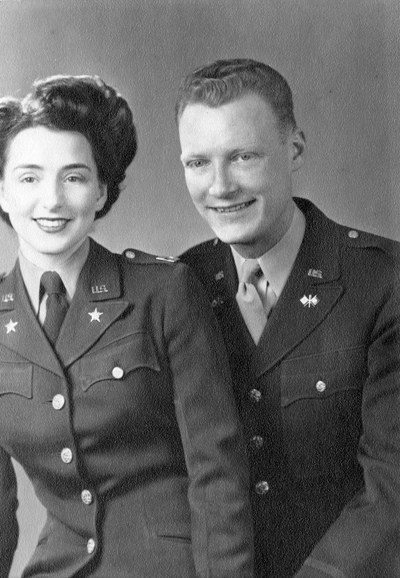