A native of the small Nebraska town of Rushville, Hulick watched many of her town’s young men enter the action of World War II. Shortly after joining, the WAACs were rebranded as the Women’s Army Corp (WAC), transitioning from an auxiliary unit of the Army to a full-fledged member.

Hulick was initially stationed at Fort Leonard Wood, Missouri where, despite her attempts to evade secretarial work, she found herself employed as a secretary in the personnel office. Quickly moving up the ranks, Hulick worked for a colonel before becoming the secretary to one of the base’s generals. From there she completed Officer Training School (OCS) at Fort Des Moines and was sent overseas to the Pacific. Landing in Brisbane, Australia, Hulick was part of a seven woman group sent to work at General Douglas MacArthur’s headquarters.  “…I was one of the seven, which… turned out to be Section 22, radio and radar… unit, and it was- with MacArthur, he said the women are here to serve. Where I go, they go” (8’).  Hulick would later follow MacArthur’s troops through their invasion of the Philippines.

While in the Philippines, Hulick was part of a group of three women and three men sent on a publicity photo tour. Their photos were part of a collection sent for publication in American newspapers. Hulick continued to serve in the Philippines, being present in Manila on Victory in Japan Day (VJ Day) in 1945. 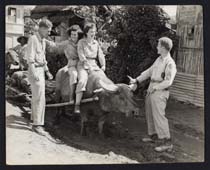