At the onset of World War II, Linden Anderson was working as a school teacher, but soon wanted to do more for the war effort.

After running into a past student wearing the Red Cross uniform, she decided to join herself. When she headed to Washington DC, for training in 1943, she was 33 years old.

Anderson was stationed as a “social worker” in a hospital in Oxford, England. The social workers were the purveyors of the recreation hall, which had a pool table, ping pong table, piano, and library. For those not well enough to be moved to the recreation hall, social workers made rounds, reading aloud, providing a listening ear, and writing letters for GIs that were too injured to do so themselves. They would arrange parties, performances, and games. There were weekly off-base trips for those who were well enough.

After the war ended Anderson went back to the States and began teaching again. However the Red Cross asked if she could serve overseas during the post-war occupations of Japan and Germany. She served with the Red Cross until 1973, also serving during the Korean and Vietnam wars. Anderson said that it made for a rewarding life, difficult at times, but overall, a very rewarding life. 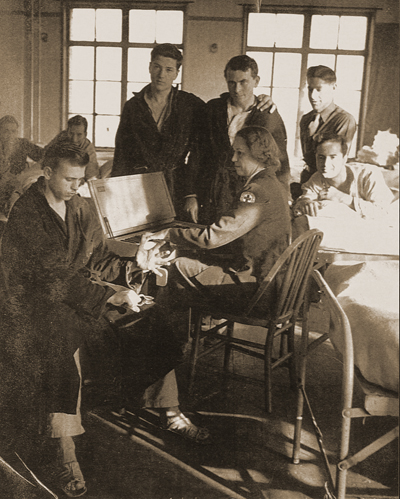