“There was such a need for women to join the Corps to relieve the men. In fact, enough women joined to form the Sixth Division for the male Marines. So, it was necessary and a great help to the war effort that we joined. It made you feel good about doing it.”

In 1943, Charlotte Owen (née Plumber) enlisted in the US Marine Corps Women’s Reserve as a member of the newly created Women’s Reserve Band. The 43 member band gave concerts at graduations, hospitals, war bond tours, weekly radio programs, and even for President and Mrs. Roosevelt.

Owen became the first woman to conduct the all-male Marine Corps Band. After being discharged in December 1945, Charlotte married Charles E. Owen, head of percussion for the Marine Corps Band. Her husband remained a member of the band, serving for 20 years.  Owen continued her own musical career, playing in the Arlington Symphony. Reflecting back on her time in the Marine Corps, Owen said “it was the busiest time I think in my whole life. But, it was wonderful, and it was rewarding, and we felt like we were doing some good, you know. Music does pick up people’s spirits and we tried to program things that would be right for our audience”. 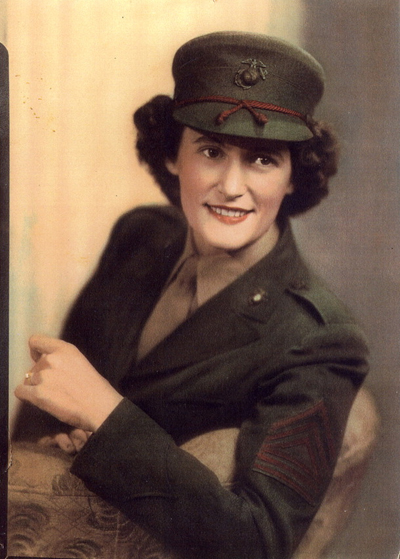