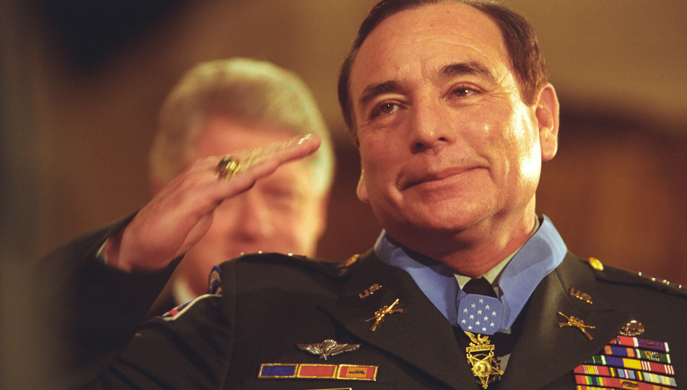 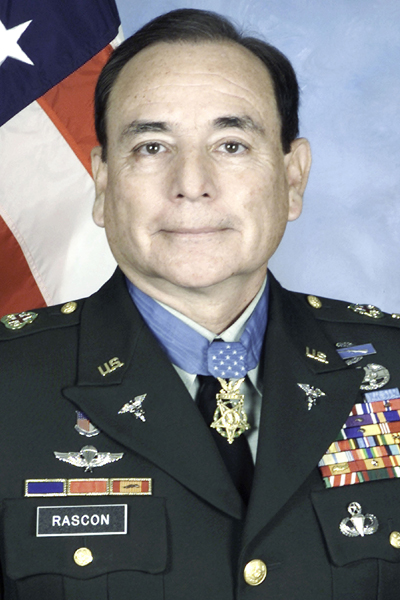 Almost 34 years after what he described as “ten minutes of hell” in Vietnam, Alfred Rascon received the Medal of Honor from President Clinton.

Born in Chihuahua, Mexico, Alfred Rascon moved to the United States with his family at four years of age. Though not a citizen, he enlisted in the Army after graduating from high school, and was sent to Vietnam with the 173rd Airborne Brigade. On March 16, 1966, an intense firefight broke out in the jungles of Long Khanh, and Rascon was ordered to stay sheltered. However, after seeing members of his platoon wounded on the trail ahead, Rascon ran forward to aid them, staying on his feet despite being hit several times by grenade shrapnel and bullets – and saving the lives of several men before he finally passed out from his own wounds.

The men whose lives he saved nominated Rascon for the Medal of Honor. Rascon himself, however, had several months in the hospital ahead. After he recovered, he enrolled in college and became a naturalized U.S. citizen, later returning for a second tour in Vietnam.

Years later, at a reunion of the 173rd Airborne, Rascon’s platoon discovered that their nomination had been lost. Determined to see him receive the award, they petitioned the Army to reopen the case, and then asked Illinois Rep. Lane Evans of the House Veterans Affairs Committee to intervene with the White House. Finally, on February 8, 2000, Rascon received the Medal of Honor from President Clinton. He went on to serve in Afghanistan and Iraq with the Medical Service Corps; the Army renamed its training school for medics at Fort Campbell, Kentucky in his honor.

His Citation Reads:
Specialist Four Alfred Rascon, distinguished himself by a series of extraordinarily courageous acts on March 16, 1966, while assigned as a medic to the Reconnaissance Platoon, Headquarters Company, 1st Battalion (Airborne), 503rd Infantry, 173d Airborne Brigade (Separate). While moving to reinforce its sister battalion under intense enemy attack, the Reconnaissance Platoon came under heavy fire from a numerically superior enemy force. The intense enemy fire from crew-served weapons and grenades severely wounded several point squad soldiers. Specialist Rascon, ignoring directions to stay behind shelter until covering fire could be provided, made his way forward. He repeatedly tried to reach the severely wounded point machine-gunner laying on an open enemy trail, but was driven back each time by the withering fire. Disregarding his personal safety, he jumped to his feet, ignoring flying bullets and exploding grenades to reach his comrade. To protect him from further wounds, he intentionally placed his body between the soldier and enemy machine guns, sustaining numerous shrapnel injuries and a serious wound to the hip. Disregarding his serious wounds he dragged the larger soldier from the fire-raked trail. Hearing the second machine-gunner yell that he was running out of ammunition, Specialist Rascon, under heavy enemy fire crawled back to the wounded machine-gunner stripping him of his bandoleers of ammunition, giving them to the machine-gunner who continued his suppressive fire. Specialist Rascon fearing the abandoned machine gun, its ammunition and spare barrel could fall into enemy hands made his way to retrieve them. On the way, he was wounded in the face and torso by grenade fragments, but disregarded these wounds to recover the abandoned machine gun, ammunition and spare barrel items, enabling another soldier to provide added suppressive fire to the pinned-down squad. In searching for the wounded, he saw the point grenadier being wounded by small arms fire and grenades being thrown at him. Disregarding his own life and his numerous wounds, Specialist Rascon reached and covered him with his body absorbing the blasts from the exploding grenades, and saving the soldier's life, but sustaining additional wounds to his body. While making his way to the wounded point squad leader, grenades were hurled at the sergeant. Again, in complete disregard for his own life, he reached and covered the sergeant with his body, absorbing the full force of the grenade explosions. Once more Specialist Rascon was critically wounded by shrapnel, but disregarded his own wounds to continue to search and aid the wounded. Severely wounded, he remained on the battlefield, inspiring his fellow soldiers to continue the battle. After the enemy broke contact, he disregarded aid for himself, instead treating the wounded and directing their evacuation. Only after being placed on the evacuation helicopter did he allow aid to be given to him. Specialist Rascon's extraordinary valor in the face of deadly enemy fire, his heroism in rescuing the wounded, and his gallantry by repeatedly risking his own life for his fellow soldiers are in keeping with the highest traditions of military service and reflect great credit upon himself, his unit, and the United States Army.

End the War in Vietnam. Down with Nixon!