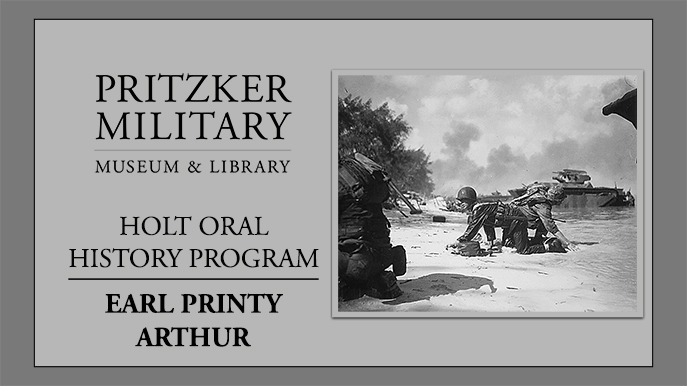 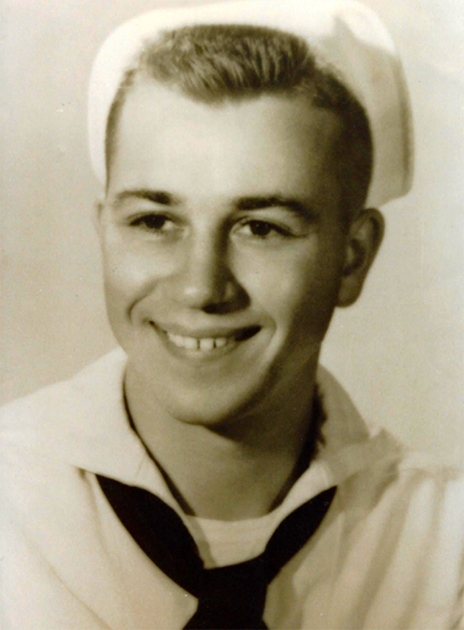 Whether treating injured Marines under heavy fire at the Battle of Saipan or performing in military musical troupes, Petty Officer 3rd Class Earl Printy Arthur always mustered all his efforts. In this interview, Arthur offers a glimpse of not only orchestras but also of the orchestration of the amphibious invasions on the Pacific front during World War II.

Born on May 15, 1924, Arthur, the son of a Methodist minister, grew up singing in church choirs which would prove to be formative. Similarly, the family moves within Ohio cultivated his ability to adapt to new situations. His summer job working for a veterinarian led him to sign up for pre-vet program at Bowling Green State University. Yet, when he saw that so many of his peers were drafted, he chose to enlist to the US Navy on March 15, 1943.

While training as a hospital corpsman at Naval Station Great Lakes, where he learnt skills, such as First Aid, he was invited to join the 120-voice choir company. The choir performed for popular radio programs such as, “Meet Your Navy”. He was then selected to be part of the elite admiral’s Bluejacket Choir. Then the Navy “knocked on his door” and Arthur became part of the US Naval Amphibious Battalion.

He continued his training at Little Creek, Virginia and at Fort Pierce, Florida. As part of an integrated forty-four men team, which included seamen, signalmen and others, the eight corpsmen learned how to transport Marines to landing beaches for combat missions. Although their role was a supportive one, it was still necessary for the corpsmen to learn how to use guns on combat ships.

Arthur was assigned to the USS Leon (APA 48), a troop transport ship. During non-combat times, the corpsmen were integrated into other teams, contributing to the necessary work of the boat, in addition to their health care duties. If there was an assault, the corpsmen would pull together and work with the landing combat troops. Indeed, after the USS Leon arrived in Hawaii, in April 1944, the corpsmen practiced techniques such as climbing over the side of the ship into cargo nets, making their way to LCVPs [landing craft, vehicle personnel] and transporting load after load of troops to the beach under the command of the Lieutenant JG [Junior Grade].

Arthur received seven battle stars for Saipan, Peleliu, Leyte Gulf (2), Lingayen Gulf (2) and Okinawa.  For Arthur, the invasion of Saipan, one of the Mariana islands, proved to be the worst. When the ships first rendezvoused in the Marshall Islands, he was assigned to an LST [Landing Ship Tank], used to transport heavy machinery in support of the 4th Marine Brigade for the invasion of Saipan, on June 15, 1944. After landing at the wrong part of the beach, he and the other corpsmen attended to casualties for three days straight under heavy mortar fire, staying in their foxholes at night. Arthur feels lucky that there was not more than one casualty, possibly because the mortars hitting the water weakened their trajectory. He also noted that older native people were rounded up and transferred to the powers that be.

After returning to the USS Leon, Arthur heeded a call to accompany the ambulatory injured from Saipan to hospital ships. When completed, he then discovered that the USS Leon had already departed due to reports of an imminent Japanese attack, the Great Mariana Turkey Shoot on June 19-20.

Hopping a ship ride and then a DC-3 plane ride back to the USS Leon, at Kwajalein or Eniwetok, in the Marshall Islands, he learned that no one noticed his absence!

Because of the heavy casualties of Saipan, the Leon was turned into a hospital ship and Arthur assisted doctors with “meatball surgery”. That being said, assisting in amputation of the leg of a young boy, was the one step too far for him.

The invasion of Peleliu in the Carolinas took place on September 15th, 1944. Luckily, Arthur and others were held in reserve on a little island called Anguar, where they faced no resistance.

The USS Leon was next involved in transporting Army troops to Leyte in the Philippines, for the battle that began on October 20th, 1944. Luckily, this transport was comprised of troops for the third or fourth wave on the invasion, meaning that most of the action was already inland by the time that Arthur and the others deposited the troops at the shores.

As in the case of quick departure of the USS Leon from Saipan, it now departed from the Leyte Beach in response to the upcoming South China Sea Raid.

Regarding the ship’s approach to Okinawa, in April 1945, Arthur recalls, “… battleships and cruisers and destroyers and aircraft carriers had a ring around Okinawa and the Japanese kept coming at us with Kamikaze and…the Navy, they took more casualties and damages in that battle than they did all the rest put together”.

Arthur was part of the first or second wave of the invasion there but because the Japanese changed their tactics and built their defense inland such as near the Shuri Castle, Arthur did not see any casualties during the three or four days when he was there.

Arthur also noted that the USS Leon brought troops to the Lingayen Gulf on Jan. 9, 1945, and witnessed a kamikaze attack around that time.

Sent next to US Naval Hospital, Aiea in Oahu, Hawaii, serendipity showed her hand. Arthur learned of a need for a trombone player at the Aiea Heights Hospital Big Band, the “Musical Medics” to play at dance parties.

The trombone playing would be in addition to his “day job” as a corpsman. He succeeded in not being transferred to another ship and celebrated VJ Day in Hawaii.

After the war, Arthur returned to Bowling Green State University, eventually choosing to study music since he could not be kept from playing in the band and singing in a choir. It was at college where he met Jo Ann Enger, the woman who became his wife, on September 3, 1949. They celebrated seventy years together though sadly, Jo passed away in 2019. He credits her for doing a great job raising their five wonderful children.