Wanda Helen Hutchinson (née Caldwell) was already working as an x-ray specialist and lab technician when the WAVES were created.

In 1941 she enlisted in the WAVES, becoming one of the first women to serve in the Navy during World War II. Hutchinson travelled to the State Teacher’s College in Cedar Falls, Iowa for basic training. Hutchinson’s group learned basic military skills from an all-male unit, because the WAVES were a newly established entity; the with no female officers to train the new arrivals.

Hutchinson was one of 42 women at basic training with prior medical experience. After completing training, she was sent to the U.S. Naval Hospital in San Diego, California. At the hospital, Hutchinson worked closely with servicemen departing for the Pacific and returning from combat. She administered shots to them before they left for the war and tended to the wounded returning from the Pacific. In addition, she prepared blood work and tested soldiers for malaria and other common diseases. Hutchinson continued to serve in the WAVES until she was discharged in 1945. Her rank at discharge was Pharmacist’s Mate Second Class.

Her husband also served in the Navy during World War II, the Korean War, and after. Hutchinson remembers most fondly the years they were stationed on Guam. Of their four sons, three entered military service. 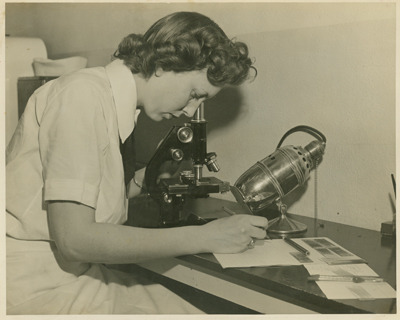