When Judy LaTurno’s (née Jensen) friends joined the Navy as nurses, she quickly decided that she too would join the WAVES. After her induction into the WAVES, LaTurno was sent to Bethesda, Maryland, for eight weeks of hospital training.

Upon completing training, LaTurno was stationed at Great Lakes Naval Base, just north of Chicago. She worked in the main wards of the hospital, but soon she volunteered to be transferred to the psychiatric service. This required her to complete a six-month training course.

After training, LaTurno was transferred to the psychiatric services section of the hospital, where she began working as the secretary to one of the doctors. At this point, LaTurno had moved up in rank from Seaman Third Class, to Seaman First Class.

Eventually LaTurno was employed by the head of the psychiatric ward. This doctor was responsible for interviewing patients, all of whom were returning veterans, to ascertain their history and mental condition. LaTurno assisted by taking notes on the sessions. In addition, LaTurno served in transport units, responsible for transferring more severely ill patients from the Great Lakes Hospital to the U.S. Naval Hospital in Bethesda, Maryland.

LaTurno served for two years in the WAVES, and was discharged after the end of the war in 1945. 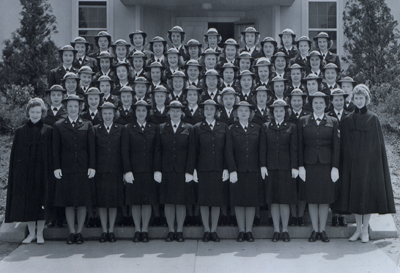