On July 17, 1944, Frances Stevenson (née Friedman) began an almost eight year career in the Navy when she enlisted in the WAVES.

Stevenson was sent to Hunter College in the Bronx, NY for basic training, then to Cedar Falls, Iowa for yeoman training. In the Navy, yeomen are responsible for clerical work, including the drafting of letters, notices and reports. After three months of training, Stevenson was sent to the Bureau of Navy Personnel in Arlington, Virginia, where she worked in the office of the postal department.

After approximately six months of work with the post, Stevenson was transferred to the finance department. She was promoted to Yeoman Second Class at the time of her transfer. While stationed in Arlington, Stevenson and her fellow women would frequently take sightseeing trips into Washington, D.C.

On May 30, 1949, she married her husband, also a member of the Navy. In the early 1950’s she began serving in the Navy Reserve. Eventually the Navy was not able to station the married couple together. Rather than be separated, Stevenson retired on November 13, 1952. She returned to work for her commander in the finance department as a civilian. 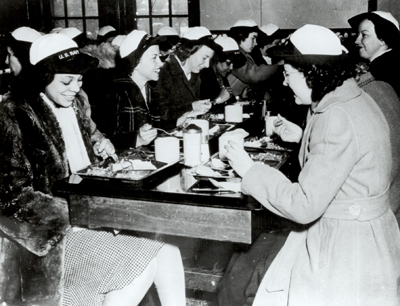