Patty Thomas was the dancer in one of the USO troops that usually consisted of a comedian, singer, actress, and dancer. The comedian in her troop was Bob Hope.

The troop went wherever Hope wanted. They did over 150 shows in 3 months in the Pacific Theater. Thomas was devoted to her role as dancer. Once when the transport plane they were riding in nearly crashed, all Thomas could think about was saving her dancing shoes. Later she realized, “I thought everyone loved tap dancing, but that’s not exactly what it was. It’s a kid that is 21 years old, she has a 34-24-34 figure and long legs, and that’s not exactly what they were there to do, to hear my taps.”

The troop met the servicemen, signed autographs, toured the bases, and took their meals with both officers and the enlisted. The most difficult part of touring was visiting the hospitals. On one occasion Thomas watched as the singer, Frances Langford, serenaded and held the hand of a wounded soldier as he died.

Though some might question the value shipping entertainers all over a war zone Thomas said:

“Some of them are going on to war and something like 40% didn’t come back. 60% came back, but the 40%, [we] made them laugh, helped them forget what was going to happen. That was our reward. You know that you have done something worthwhile in this life.” 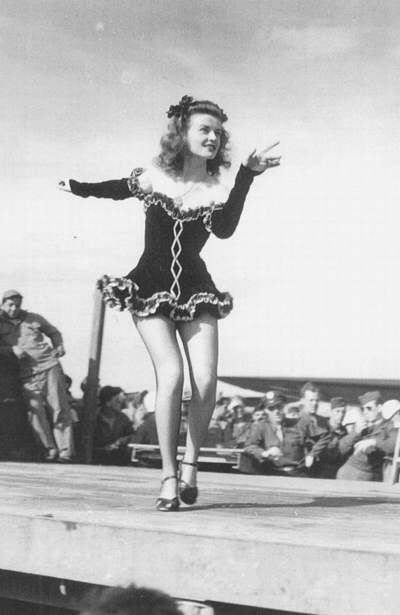