Kathleen Stoye (née Thomson) graduated from college in 1937.  She worked in an office near the bay of San Francisco, and could see the battleships and airplanes.

She volunteered at USO canteens, but she wanted to do more. The WAVES recruitment officer convinced her to join the SPARs instead. As a result, she went to officer training school right away, instead of waiting three months.

Stoye was in the first class of SPAR officers who attended the Coast Guard Academy with their male counterparts. They learned the history of the services, the rank structure, the jobs, how to behave as seamen, make up a bunk, drills, and to obey orders. Stoye said it gave them a great sense of purpose to be there with the men. However not all things were equal: “In the training they gave us everything from rowboats to beautiful big sailing vessels, to just ride on and have the chance to feel it. But they didn’t ever, at that point, ever let us go to sea. That was not on the agenda for women.” 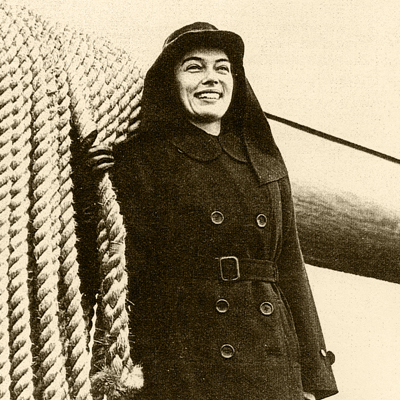