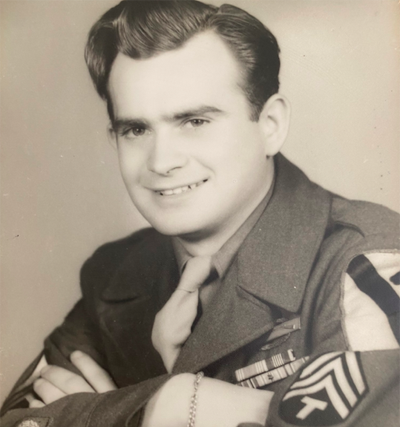 Earl Fornaciari was born in Chicago in 1924. He grew up like most young boys at the time, enduring the Great Depression, while still managing to enjoy White Sox baseball and Chicago Cardinals football. Fornaciari was a junior in high school when the Japanese attacked Pearl Harbor in December of 1941. He was inducted into the United States Army in July, 1943, shortly after graduating from Parker High School.

After completing basic training at Camp Roberts California, Fornaciari was assigned to the 27th Infantry Division. His military preparation continued with stops in Hawaii and the New Hebrides for more intense jungle training. By the time he completed his training the Japanese hold of the Pacific had been diminished.

The 27th Infantry Division was given the responsibility of joining the assault on the Japanese stronghold on the island of Okinawa.  The battle began in early April of 1945. It would take the American military several months to defeat the Japanese and take control of Okinawa. The fighting was very difficult in what would become the final battle of WW II. One of the most vicious engagements was for Kakazu Ridge. Fornaciari and the rest of the 27th Division took part in this action starting in mid-April.  In preparation for the American assault the Japanese had fortified the ridge by making tremendous use of caves which dotted the Okinawan hillside. In recalling the efforts to defeat the entrenched Japanese Fornaciari said, “There were several ways we would eliminate the Japs that were in the caves. A fellow would crawl next to a cave entrance while the rest of us would provide supportive fire in order to keep the enemy down and out of view. The G.I that would sneak up to the cave would heave a satchel of dynamite into the cave. Another thing we used were phosphorus grenades. We threw them into the caves, if a person got it on their skin it would burn completely through, extremely painful”.

Following the eventual American victory on Okinawa and the dropping of the atomic bombs just a few weeks later the Japanese finally surrendered.  Earl Fornaciari was very proud of his service and received the Bronze Star in recognition of his efforts. In reflecting on his time in the United States Army Fornaciari said, “It is something you cannot forget, will not forget and will be proud of. I am glad I was there, even though it took three years out of my life I do not regret it one bit.”

Like many returning veterans Fornaciari took advantage of the G.I Bill and went to college upon his return home. He completed a Master’s Degree in Educational Administration from DePaul University and would proudly serve as the Principal of Chicago’s Esmond School for more than thirty years. Earl and his wife Lois raised a family in Flossmoor, Illinois. He enjoyed his retirement by spending time with Lois at their vacation home in Wisconsin. Earl Fornaciari passed way in 1998.

Book dedicated: Crucible of Hell: The Heroism and Tragedy of Okinawa, 1945 by Saul David

Glider Infantry Ready Themselves for Their Flight into France