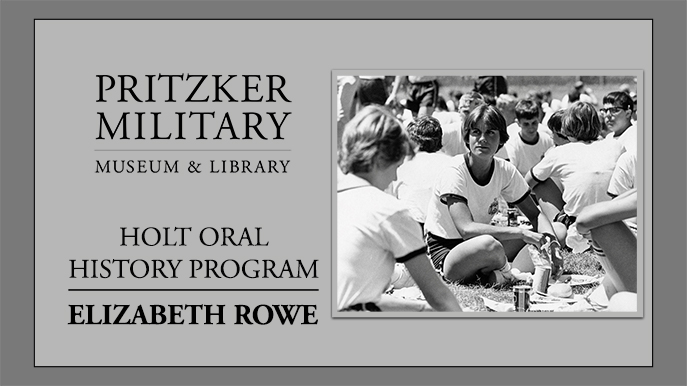 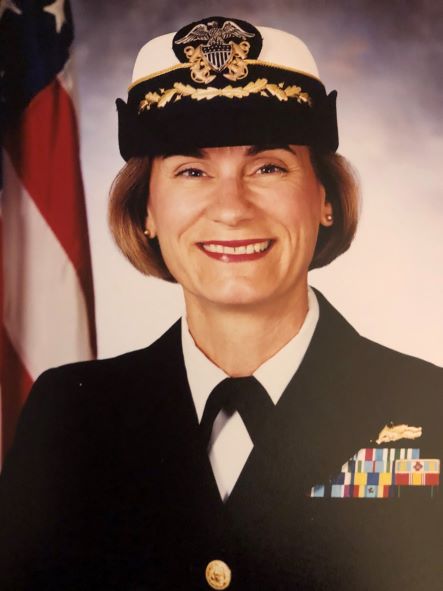 Being a pioneer is not an easy endeavor. Elizabeth Anne Belzer was one of the first group of eighty-one female midshipmen inducted at the United States Naval Academy in Annapolis, in 1976. Neither harassment nor questionable media attention prevented her from achieving an accomplished twenty-five-year career in the US Navy. In this two-part interview, Rowe offers an overview of her naval career in the first interview with Leah Cohen. She further discusses women in the armed forces in the second interview with Operation HerStory coordinator and veteran Ginny Narsete.

Liz Rowe, born in 1958, grew up in a close family. At age twelve, her father moved his family to a farm at Westminster, Maryland, intending to farm in addition to his “day job”. The family carried out back breaking work such as digging ditches and tending to cows, in addition to their regular responsibilities thus instilling in Elizabeth a strong work ethic. In a family of three sisters and one brother, the girls were given “equal opportunity”.

Liz was aware of the women’s movement and her own mother’s decision to return to school at age forty. Yet, she did not consider a military career, until meeting a recruiter from the Naval Academy at Annapolis who clarified that it was not open to women. Shortly after, her mother read a newspaper article stating that Congressman Goodloe Edgar Byron was accepting applications of women to military academies.

It was all so quick that the first response which Rowe received from the congressman’s office on Sept. 26, 1975, was that he would keep her letter on file. Two weeks later, on Oct. 8, 1975, after President Ford passed Law 94-106, requiring that military academies accept women, the office wrote a second letter stating that they had forgotten to have included the application in their previous correspondence.

The Academy was slow to adapt to this new reality from issuing ill-fitted uniforms to expecting women keep pace with men during runs, resulting in widespread shin injuries. Rather than keep the female midshipmen as a group, Annapolis would scatter three women per sixty male midshipmen. This fostered competition and blame between women, rather than mutual support, a fact which Rowe deeply regrets.

Many of her male peers crossed the line from hazing to harassment by acts such as repeatedly putting dead rats in the mailboxes of their female peers or by insulting the young women’s femininity. Unfortunately, the administration overlooked these slams though individual men, such as her company officer, were strongly supportive, if bystanders.

Her spirituality, such as reciting Psalms at an altar under the stairs to Memorial Hall, her activities with friends, and her mother’s acceptance of her decisions helped her.  Liz’s six-week experience on the USS Lexington, during the summer, where women were starting to be integrated in the crew, showed her that this process did not have to be fraught with tension and much depended on tone set by the leadership.

Indeed, Liz was a Trident Scholar at the Academy and the first woman to graduate, earning her degree in physics.

At a time when federal law 10 USC 6015 banned women from serving on combat ships and most did shore duty, Liz was one of the few assigned to a ship, in this case, the USS Samuel Gompers, a destroyer tender. She had two six-month deployments which proved to be formative. Her work with the Auxiliaries and Electrical Department which was responsible for complex ship systems developed her leadership/managerial skills as an officer. The ship’s passage in the southern hemisphere, also inspired in her a love of travel.

Liz’s role for the next few years, was that of combat systems instructor at Surface Officers Warfare School in Coronado, California. In 1986, she then stood at the precipice, about to launch into the private sector, when the Navy offered to send her to MIT to study ocean engineering. Belzer and her baby daughter, moved to Boston, doing research at Woods Hole Oceanographic Institution, in the summers.

In 1987, Liz married her current husband, Don whose work took him to Norfolk. In light of the continued glass ceiling banning women from combat operations, Liz chose to focus on Surface Warfare (on shore). She worked as Current Operations Officer until her assignment as Flag Secretary to the Admiral in charge of the Norfolk Naval Base. One highlight was the base’s hosting a Soviet ship, reflecting the warming of relations between the US and the Soviet Union.

After a studying at Armed Force Staff College in Norfolk, Rowe was now commissioned as an executive officer at the Headquarters Support Activity, which oversaw the base for the Commander in Chief Atlantic Fleet (CINCLANTFLT), US Atlantic Command (USACOM), and (Supreme Allied Command) SAC for NATO forces, also at Norfolk. Rowe enjoyed being responsible to maintain this huge base.

In 1993-1994, Rowe studied for a master’s degree in security and strategic studies at the Naval War College, in Newport, Rhode Island, focusing on history of women in the Navy. She was then appointed as the joint doctrine division head of the U.S. Atlantic Command in Norfolk, soon to be promoted to chief of staff. Doctrine was changing and Commander Rowe enjoyed doing briefings on cutting edge technologies such as drones in addition to managing the personnel and contractors involved in developing them. After a year as the executive assistant to the deputy commander-in-chief at U.S. Atlantic Command, Rowe campaigned successfully for last job in the Navy as Afloat Data Analysis Head at the U.S. Naval Safety Center in Norfolk which she held until her retirement from the military in 2000.

In contrast to her attitude as an adolescent, Rowe was on the lookout for potential gender inequalities, throughout her career, attempting to nip them in the bud. Even today, Rowe affirms her female classmates from Annapolis who still suffer a degree of trauma from this experience and calls on society to honor them.

Yet far from being a “vale of tears” Rowe is appreciative of her husband who was an active parent to her daughter and to the two other children and of the Navy. It trained her to be a leader as well as organized and detail oriented; skills which she later applied to business in her civilian life.

Upon reflection, Commander Rowe hopes that throughout her whole career she took care of everyone who worked for her or even came in contact her, allowing them to be the most that they could be.