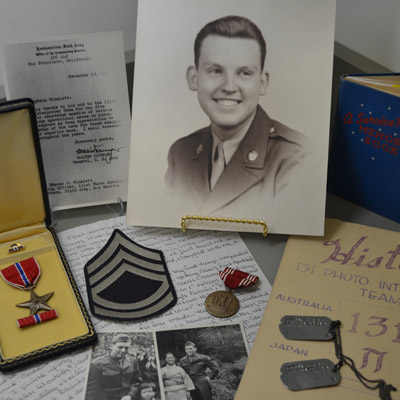 Jack V. Sewell was born in St. Joseph, Missouri on June 11, 1923 to Arthur B. and Annie L. Sewell. He attended St. Joseph Central High School and was the Art Editor for the school magazine Tower Gleams. He joined the Army in 1943, entering the Army Special Training Program in July of that year to study Spanish at City College of New York in New York City.

In February of 1944, Sewell began training in photo intelligence at the Military Intelligence Training Center at Camp Ritchie in Maryland. He left the U.S. for the Pacific Theater in July serving as a member of 131 Photo Interpreter Team. His unit served with the Allied Geographical Section and the 6th Army in the South West Pacific Area (SWPA) from July, 1944 until January, 1946 processing and interpreting aerial intelligence photography and creating photo mosaics of various strategic locations in the Pacific. The team provided photo intelligence to U.S. forces in preparation for the Allied invasion of Luzon. Sewell was stationed in New Guinea, Australia, and the Philippines during the war and finished his service as a Technical Sergeant in Kyoto after Japan surrendered.

After the war, Sewell continued to pursue his love for art. After receiving both his bachelor's and master's degrees from the University of Chicago, he received a doctorate degree from Harvard in Oriental Art with an emphasis on art from India, China, and Japan. He began working for the Art Institute of Chicago in 1951 and retired 37 years later as the Curator of the Oriental and Classical department. He is the author of multiple books on art from Asia. He died in Dubuque, Iowa on November 4, 2010.

The Jack V. Sewell collection consists of personal correspondence, official documents and papers, ephemera, awards, scrapbooks, and photographs related to Jack V. Sewell during his service as a photo interpreter for the 131 Photographic Interpreter Team of the U.S. Army during World War II. The collection also includes correspondence, papers, and photographs pertaining to the Sewell family, Lucy Shortridge, Edward Kelley, and George Martin.