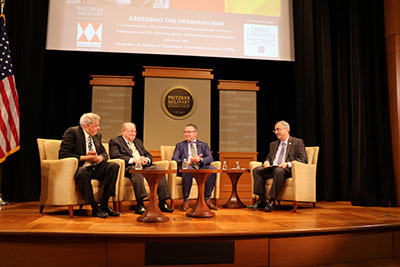 Follow-up Q&A for the “Assessing the Ukrainian War” Panel

On April 13, the Pritzker Military Museum & Library hosted the panel “Assessing the Ukrainian War.”  Chief Military Historian Dr. Matthew S. Muehlbauer moderated with panel with LTC (ret.) Alexander S. Vindman, Amb. (ret.) Ian Kelly, and Professor Dick Farkas.  Our panelists have graciously answered some the questions they did not have time to address during the program, and their responses appear below.

What are your thoughts on Russia using chemical warfare against Ukraine?

Prof. Farkas: I do think it is a possibility if the urban resistance continues to be effective for the Ukrainians.  I think it is unlikely that it will go undetected since the Russians have in the past been quite clumsy with such weapons.

Amb. Kelly: I'm afraid it is quite possible that Putin's forces could deploy some type of chemical weapons in urban areas where it is finding it hard to dislodge Ukrainian troops. Those areas include Mariupol, where already there are reports that they may have used non-lethal gas. I've seen media reports of Russians discussing using crowd-control chemical agents to "smoke out" troops in basements in the besieged city.

LTC Vindman: At the moment, the U.S. has employed a policy of strategic ambiguity in relation to any potential use of Russian chemical weapons. This has raised the bar for a U.S. response, and the Kremlin has been forced to take this unknown variable into account. Nevertheless, as Ukrainian President Volodymyr Zelenskyy and countless other government officials and analysts have warned, a Russian chemical weapons attack is still a distinct possibility. There have already been unconfirmed reports of chemical weapons usage in places like Mariupol and Izyum. If or when these reports are confirmed, the U.S. will be forced to act. Any failure to take drastic measures in response will only invite further escalation, more chemical weapons attacks, and continued abrogation of treaties and agreements governing the production and use of chemical weapons.

What about the reports that Russian soldiers were ordered to rape and kill women in Ukraine?

Prof. Farkas: I think that is very unlikely.  Armies have engaged in such abuses but my best sense is that when it happens it is very localized and brought on by excessive drinking.

Amb. Kelly: There's no doubt Russian troops have committed such crimes in occupied areas. The Organization for Security and Cooperation in Europe has already issued a report of an investigation documenting Russian "crimes against humanity". I can't say whether they were ordered to do so by their leaders. I can say though that those leaders enabled an environment for such crimes by calling Ukrainians 'Nazis' and other dehumanizing names.

LTC Vindman: Truth be told, I don’t know. This sort of intentionality is difficult to prove. However, the Russian military is a poorly disciplined force, and Russian military personnel have historically acted this way. Moreover, the Russian government and its various media proxies have created the conditions necessary to instigate and facilitate the rape and slaughter of Ukrainian women. The continued demonization and dehumanization of Ukrainians in the Russian mass media cannot be discounted. There are also some people who believe this is a fundamental component of the Russian way of war, and they maintain that it is almost certain that Russian leadership condoned these war crimes, if they did not outright deliver these orders. For instance, Vladimir Putin just chose to honor the 64th Motorized Brigade, upgrading its name to the 64th Guard Motorized Bridge. The Ukrainian Ministry of Defense has indicated that these were the same Russian military personnel who committed atrocities in Bucha.

Why was everyone so wrong about Russian military capabilities?

Prof. Farkas: I don’t think everyone was wrong.  The problem we often have with such assessments is our reliance on journalists and our impatience for the “bottom line.”  Both tend to cloud the picture.  Scholars familiar with the Russian military reality are aware that the Russian system has many limitations including but not limited to the one I mentioned in the program:  the inability to keep pace with technology and it application and the absence of training to deal with insurgency.  Wholesale destruction is the Russian default tactic when other tactics fail.

LTC Vindman: Not everyone was wrong, but for many analysts, they could only evaluate the Russian military and make predictions based on what the military looked like on paper. If you only analyzed the Russian military through data, spreadsheets, and written reports of their military doctrine, then it appeared superficially that Russia had a massive quantitative and qualitative (albeit to a lesser extent) advantage over the Ukrainian military. Of course, these calculations on paper proved worthless once the tanks began rolling and the ineffectiveness of Russian military leadership came to the fore. Since then, I think even the most seasoned professionals have been surprised by the fact that the Russian military has consistently failed at some of the most basic tasks in any military campaign.

Are there tensions between factions of Eastern/Russian Orthodox Christian churches?

LTC Vindman: Yes. These tensions extend further into the past than I can explain here, but one of the most important issues in recent memory was the Orthodox schism in 2018. At that time, the Moscow Patriarchate (Russian Orthodox Church) unilaterally chose to break Eucharistic communion (i.e. broke ties) with the Ecumenical Patriarchate of Constantinople because of the latter’s decision to grant autocephaly (essentially ecclesiastical self-rule) to the Ukrainian Orthodox Church. Since the most recent offensive campaign began in February, divisions have only deepened, including within Russia itself, as parishioners, priests, and full branches of the Russian Orthodox Church have moved to condemn the war. Meanwhile, others continue to function as extensions of the Russian government in much the same way as Patriarch Krill, who has offered his full-throated support for Vladimir Putin and the “Russian World” project.

What impact will the war have on agricultural production, and its effect on world markets?

Prof. Farkas: Production will be severely impacted. My guess would be by 40%. Exports (that earn foreign currency) will also decline sharply since Ukrainian ports will not be functioning in any normal way.  The ability of the Ukrainian government to monitor and manage what is produced will be limited to Western Ukraine.

LTC Vindman: Ukraine is a major exporter of crops like corn and wheat as well as sunflower seeds and sunflower seed oil. Because of the war, Ukraine will likely be unable to bring in a harvest comparable to last year’s, and Ukrainian farmers and companies will have difficulty with exporting their current harvest. The war will probably cause an adjustment in the mix of crops that will be planted and harvested in Ukraine as well. All of this will lead to shortfalls in production and potential shortages abroad. Russia is also a major exporter of crops like wheat as well as fertilizer. New sanctions and retaliatory export bans have created additional gaps for products that would typically be sourced from Russia. Farmers have already expressed concerns about the price and availability of fertilizer worldwide. Global markets are being negatively impacted accordingly. One should expect that food prices will continue to rise around the world, and there is particular vulnerability in some food insecure regions in places like the Middle East, North Africa, and Central Asia, which rely on Ukrainian and/or Russia agricultural exports.

Is Putin a dictator?

Prof. Farkas: This question while important does not lend itself to a clear, precise and useful answer.  Scholars and policy-makers need to recognize that the distinctions (variables) that speak to an answer are numerous and are not “yes” or “no” factors.  We need to think about this as a scale (left to right in a classic sense) and one that changes constantly.  Putin since 2000 has not demonstrated that he is singularly interested in wielding exclusive power.  He has studied and accommodated a range of other political actors in Russian society.  In essence, I am saying that the record from 2000 to 2012 with a few exceptions was to broaden the players in Russian politics.  This doesn’t make it a democracy but it also does not make it a dictatorship.  From 2012 on, a shift in his trajectory toward greater control and a narrower support base became clear.  The people closest to him tend to be understood as Russian politics as moderates in the political context there.  The Ukraine events of 2022 suggest a remarkable and significant return to what are classic authoritarian means of controlling society.  He has concentrated his power, reduced input from other segments of Russian society, and made no effort to veil his impulse to wield vast power in both domestic and international affairs.