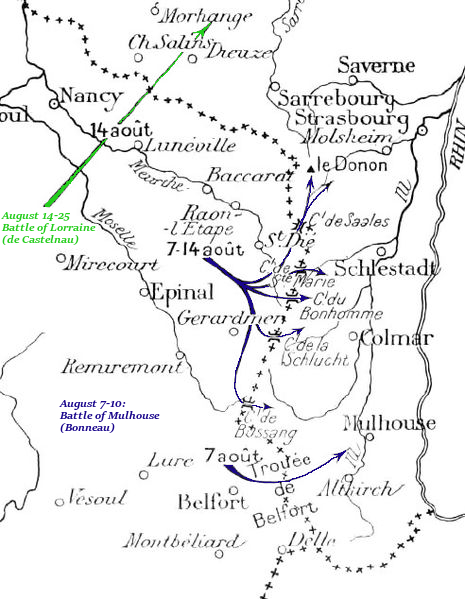 The Battle of Lorraine

The Battle of Lorraine occurred during World War I from 14 August through 7 September 1914 in France. The United States, still practicing neutrality under the administration of President Woodrow Wilson, had not yet joined World War I. This battle was fought by the armies of France and the German Empire in and around the city of Lorraine and is part of the campaign series known as The Battle of the Frontiers.

If the name of the city of Lorraine sounds familiar to you, you may be recognizing it from other engagements as the administrative region of the Grand Est of France saw combat in both World War I and World War II. The frequency of combat is due to its location in the northeast of France with a shared border with Germany.

As this was an early battle in the war, the units of the French army approached from the south led by General Auguste Dubail.  Additional French units were led by Noël de Castelnau and Ferdinand Foch. The German Empire’s army, led by Konrad Krafft von Dellmensingen, Rupprecht of Bavaria, and Josias von Heeringen, had time to dig in. As a result, the German Empire’s army held their ground with artillery barrages.

By August 20, the army of the German Empire had forced the French units to separate into two separate battles. The French units were forced to retreat but were able to regroup and reinforce their lines by early September.

This early battle of World War I presaged the difficulty and large casualties that would be common during the war as the combatants relied on trench warfare with relatively static lines of battle.

Learn more about the Battle of Loraine and World War I by reading:

To learn more about the early part of World War I, watch This Week in Military episodes: