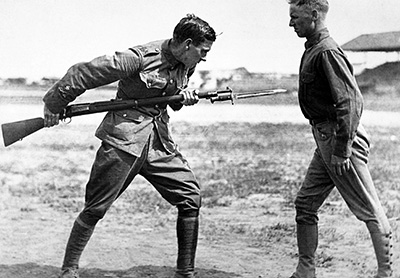 The American Krag: Obsolete at Birth

The American version of the Krag-Jorgensen rifle, officially known as the Magazine Rifle, Model of 1892, holds the unique distinction of being the first smokeless powder rifle adopted by the U.S. Army. It also has one of the shortest service lives of any U.S. rifle; having been adopted by the Army during a time of explosive technological growth that quickly rendered established norms and ideas of warfare obsolete. Despite its short service life, it did see combat in the Spanish-American War and the Philippine-American War, where both its technological shortcomings and the doctrine dictating its use were apparent.

In the 1880’s, single shot breach-loading rifles like the Springfield Trapdoor were being replaced by magazine-fed bolt-action firearms that featured a manually-cycled bolt that both extracted the empty brass of a fired round and fed a fresh round into the chamber. These internal magazines typically held around five rounds of the new smokeless powder rifle rounds that themselves were a great leap forward in technology. Many nations saw the advantages and began replacing their single-shot rifles with bolt action repeaters.

The United States, however, was slower to embrace this change, with many in the Army Ordnance Corps still clinging to the ideals and practices associated with single-shot breechloaders, most notably the importance of single loading ammunition directly into the chamber as the main means of reloading. Thus, when the Army Ordnance Corps held trials in 1890 to test magazine systems for repeating rifles, the winning design was already antiquated when compared to its peers from around the world.

That winning design was the Norwegian Krag-Jorgensen rifle. Its most notable feature was a side-loading magazine with a hinged gate located on the right side of the receiver. Where most contemporary magazine systems were loaded by opening the bolt and pressing rounds straight down into the magazine, often with a stripper clip that allowed a complete reload with a single pushing motion, the Krag was designed to be loaded one round at a time by dropping them into the open gate. In fact, the Army Ordnance Corps intended soldiers using the Krag to fire and reload one round at a time, just as they had done with the previously used Trapdoor rifles. A magazine cutoff feature was required so that operating the bolt wouldn’t pull rounds from the internal magazine, which to the Army was meant only for emergency use when the soldier was otherwise out of ammunition.

These design requirements reflect the priority on slow, well-aimed fire. The U.S. Army had adopted this methodology during the Civil War, and it was mixed with its antiquated view of individual firepower as it was believed that soldiers would waste ammunition if they were able to fire off the five rounds from the magazine in rapid succession. While the advances in firearm and ammunition made during this time certainly did make individual marksmanship a worthy and effective pursuit, other existing designs, most notably the German Mauser design, were better suited to rapid reloading while still retaining accuracy.

The final nail in the coffin of the Krag-Jorgensen design was the strength of its locking mechanism. Bolt action rifles use lugs to lock the action in place and contain the back pressure created when a round is fired. The world’s most popular bolt action design, the Mauser, had more locking lugs and was able to withstand higher pressures, making it far more suitable for the higher-pressure rifle rounds that would become the standard of the 20th century. In fact, the Krag’s immediate replacement, the venerable M1903 Springfield, was essentially a copy of the Mauser design.

The Krag-Jorgensen rifle wasn’t a bad rifle, but it was a transitional rifle. It was a testament to how the chaotic evolution of technology pushes people and nations to refine new standards, often through trial and error. It’s unfortunate that soldiers on the battlefield are the ones who ultimately must conduct this trial and bear the weight of this error.

If you enjoyed this post, please watch Dustin's past In The Armory program comparing the Krag-Jorgenson rifle and the Springfield 1903 rifle - and mark your calendars for his next In The Armory episode!