After World War II, the Viet Minh were founded and declared independence from France.  After a resounding defeat by the Vietnamese forces in 1954, the French government agreed to meet in Geneva, Switzerland to sign the Geneva Peace Accords.  The treaty divided Vietnam along the seventeenth parallel.

Elections were scheduled for 1956 with the purpose of reuniting the nation.  The United States government, however, sought to maintain the division and create an anti-communist South Vietnam state.  The election of Ngo Dinh Diem as the leader of South Vietnam in 1956 spurred an anti-communist regime.  Diem’s tactics and policies were oppressive and the Communist Vietnamese responded with the creation of the National Liberation Front to oppose Diem and reunify Vietnam.

Escalating tensions led to the assassination of Diem and a shift in the United States’ foreign policy.  Previously employing American advisors to support the anti-Communist government, the United States chose to escalate its involvement in the region, and, with the passage of the Gulf of Tonkin Resolutions, began deploying troops in Vietnam in 1964.  By the late 1960s the Communist North Vietnamese forces correctly interpreted American sentiment as heavily in favor of withdrawing U.S. troops.  The Communist Army launched a series of attacks on major South Vietnam cities, known as the Tet Offensive.  The North Vietnamese sought to push American support for the war to critical levels and force the Johnson administration to negotiate peace. By 1968, with the election of President Richard Nixon, the war had spread to Laos and Cambodia.  The American military increasingly relied on air strikes and bombings, rather than ground forces, to fight the war.  In early 1973, the United States signed the Paris Peace Agreement, ending the fighting between the U.S. military and the North Vietnamese.  The Vietnam War officially ended with the fall of Saigon in 1975. 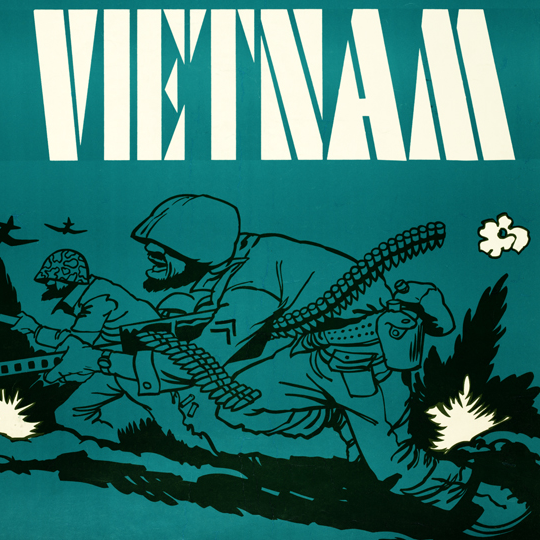