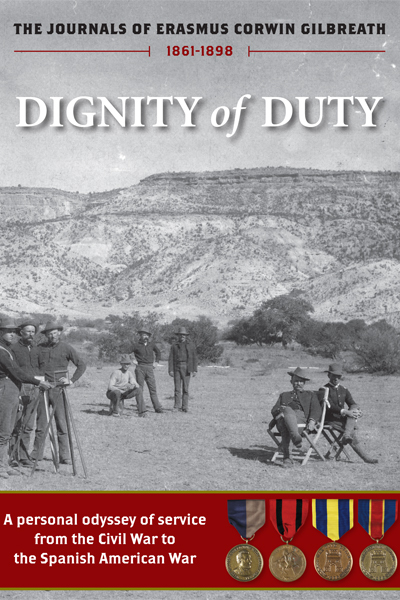 Dignity of Duty: The Journals of Erasmus Corwin Gilbreath, 1861-1898, Edited by Susan Gilbreath Lane with an Introduction by Carlo D'Este

A personal odyssey of service from the Civil War to the Spanish-American War, the Museum & Library's latest original work offers a firsthand glimpse into the life of a 19th Century American soldier and adventurer. From the blood-stained battlefields of Bull Run, Chancellorsville, and Gettysburg to the Reconstruction-era South and the vast wilderness of the western United States, Gilbreath's journals and the accompanying exhibit paint an illuminating picture of a nation seeking its identity in the wake of the most devastating event in its history. 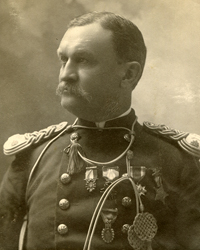 From June, 1861—when he was instrumental in the raising and organization of the 20th Indiana Volunteer Regiment out of his hometown of Valparaiso—until August, 1898—when he died of an apparent stroke while serving in Puerto Rico during the Spanish-American War—Major Erasmus Corwin Gilbreath kept detailed journals of his life and service in the United States Army. A self-taught student of history who once aspired to a career in law, Gilbreath's intelligence and natural curiosity are on full display in his writings, resulting in a collection that is as fascinating as it is enlightening to read.

Featuring an introduction by renowned historian and biographer Carlo D'Este, Dignity of Duty comprises three original documents assembled and edited by Gilbreath's great-granddaughter, Susan Gilbreath Lane, who discovered the papers by chance at the Detroit Public Library in the late 1970s.

As a young field officer during the American Civil War, Gilbreath chronicles his regiment's involvement in many of its major battles, capturing the point of view of the average Union soldier rather than the perspective of high command from which the war has so often been written. Although badly wounded at the Battle of Fredericksburg, Gilbreath was among the lucky few to survive what has been called the largest human catastrophe in American history.

"Through his eyes, we learn firsthand of the true horror of the Civil War: of the boredom, the fatigue, the death of so many on the battlefields, of the crude nature of caring for the wounded in the 1860s, of the blood and the amputations in the aid stations and primitive field hospitals." — Lt. Col. Carlo D'Este, USA (Ret.), Introduction

Gilbreath remained in the Army following the war and throughout the Reconstruction period, when his duties resulted in extensive travel throughout the war-torn South and the untamed West. A witness to the lawlessness and disorder that defined rural America during The Indian Wars of the late 19th Century, here Gilbreath documents his marriage to his wife, the birth of their three children, and the family's amazing journeys to places like Mississippi, Texas, Chicago, The Montana Territory, Philadelphia, and New York.

"My father also had stories to tell about his father’s adventures in the West: going down a river and being attacked by Indians who were shooting at the family using bows and arrows. To a city kid it all sounded very exotic...it was the Post–Civil War Journal that confirmed the reality of what I had once thought was hyperbole." — Susan Gilbreath Lane, Foreword

The Journal of the War with Spain

Ordered with the 11th U.S. Infantry to the South to prepare for travel to Cuba or Puerto Rico, Gilbreath captures in his later journals a second major American conflict from the soldier's perspective. Unknowingly nearing the end of his life and a 37-year military career, he records his thoughts and experiences until just days before his passing. 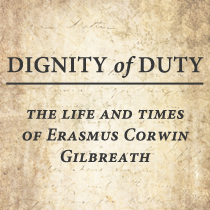 Accompanying the book is a new original exhibit of images, maps, artifacts, and books inspired by the Journals of Erasmus Corwin Gilbreath. Coming to the PMML in June 2015.