Soldiers in the Trenches

By the time the United States entered World War I, the front lines consisted largely of a maze of trenches.

In warm weather, they were filled with mud and in the winter, slush. Life in the trenches was paradoxically boring and terrifying. Despite the constant threat of gas, artillery fire, and encroaching enemy soldiers, doughboys still spent a large amount of time waiting for something to happen.

At night, under the cover of darkness, patrols crossed “no man’s land” to spy and eavesdrop on enemy lines. The most effective way to cross to enemy trenches was the belly crawl. Inching forward on elbows and knees, patrols moved from shell hole to shell hole, cut their way through the dense barbed wire, and risked capture for any small bit information about enemy movements, as aerial reconnaissance limited movement on both sides during the day.

Forced to spend hours, or even days, in wet conditions, many soldiers fell victim to “trench foot,” a frostbite-like condition that could result in the loss of toes. Multitudes of rats, attracted by decaying bodies and waste, plagued soldiers in the trenches. Other pests like lice, mites, and swarms of flies made life in the trenches even worse.

Although the influx of United States troops and the use of tanks allowed the Allies to make large advances outside of the trenches, soldiers still suffered from rain, mud, exhaustion, and shell shock (now commonly accepted as Post Traumatic Stress). The doughboys of World War I quickly learned the glory and romanticism of war were largely fiction and the reality was horrific. 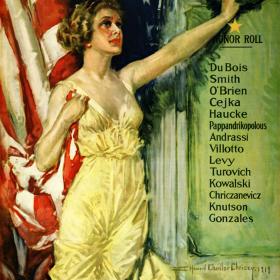 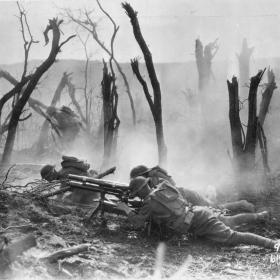