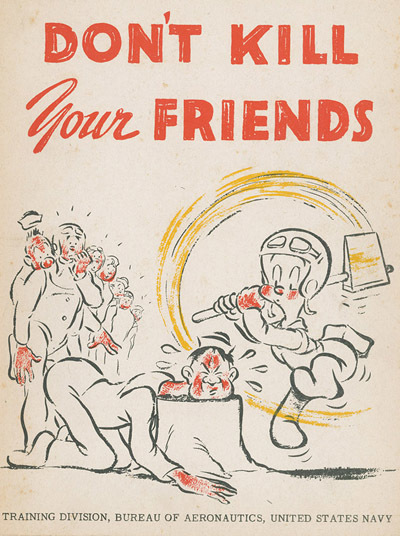 Don't Be a Dope! Training Comics from World War II to the Korean War

Don’t Be a Dope includes training comics created for the United States Army, Navy, and Air Force. Many of these posters depicted characters putting themselves in deadly situations by doing the wrong thing. The illustrations in this exhibit were a sample of the ways military personnel could make light of dangerous situations. Most of these items were created by service personnel of the era.

The onset of World War II for the United States was one of uncertainty, followed by a rallying of people to the “American ideals” and a fight against tyranny. The use of illustrated drawings, be it through cartoons, comic strips or comic books sought to inform the American viewer through information, humor, and stereotypes. The films shown in this series were from the Disney studios, and convey the need of Americans to understand their enemy, and how the war would affect them. The films chosen were ones that were available to both the general public as well as military units.

Works in this exhibit were drawn by a variety of well-known artists including Will Eisner, Herblock, Dr. Seuss, Al Capp, Robert Osborn, and Arthur Szyk.