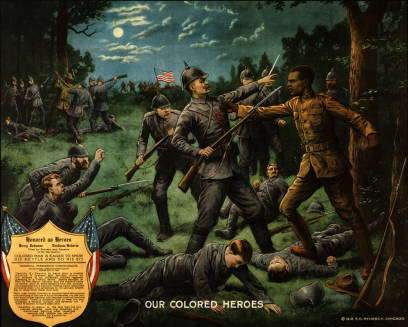 The print shows two African American soldiers in a detailed tussle with Hun troops, stabbing away at them with knife and bayonet. While on guard duty in the French sector on May 14, 1918 Needham Roberts and Henry Johnson fought off a 24-man German patrol, though both severely wounded. Both were awarded the Croix de Guerre for their actions, as well as a posthumous Purple Heart. General Pershing's communique entitled "The colored man is eager to show his mettle and do his bit" at lower left.