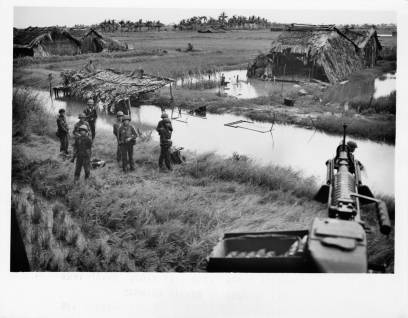 Khai Quang, South Vietnam: South Vietnamese government troops--members of the 44th Ranger Battalion--wait on the banks of the Cai-Tau Canal near Khai Quang for U.S. HU-1B Helicopters to pick them up. They had just completed "Operation Eagle Fly", a counter attack against Viet Cong guerrillas in the area, about 150 miles southwest of Saigon. During the four-hour clash between the gobernment troops and the Viet Cong, 56 of the Red led guerrillas were slain. The government troops were flown in and taken out by helicopters.