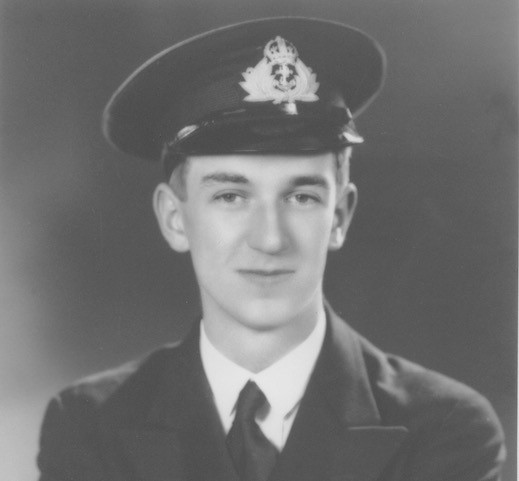 Courtenay joined the Canadian Navy at age 19, as soon as he had completed his B.S. in physics at the University of British Columbia.

Courtenay had wanted to sign up at the war's beginning, when he was 16, but his mother would not agree to his service until he completed his college degree (his father had died when he was 12).

Canada had agreed to supply radar officers to the Royal Navy and so most of the engineering and physics grads who signed up were seconded to the Royal Fleet. He was stationed at first at Scapa Flow in the North Sea, and recounted seas of 20 to 40 feet. He always relished encountering nature at her most rugged and was often the only person on deck during these high seas.

Once, the watch his mother had given him in farewell was pulled off his arm by a heavy wave. He raced across the deck and grabbed it just before it was swept into the sea. His wife still has the watch today.

Courtenay was later assigned to a fast mine layer, the HMS Apollo, which was the headquarters ship chosen by Eisenhower and Montgomery when they went to Normandy on D-Day plus 1. Courtenay was the officer on duty the night of June 4, when the coded message came in from the Admiralty announcing time and destination of the D-Day landing. He was the person who decoded it and carried it to the head of the fleet.

The BBC once interviewed him about this experience; they wanted to know his emotions on reading the message, and on knowing he was one of the only people in the world to have the knowledge of the destination and time of the invasion. Courtenay kept saying he was doing his duty; he felt you did the job assigned to you to the best of your ability and couldn't understand what the interviewer wanted to know.

The Apollo went aground off the Normandy coast and when they returned to Newcastle for repairs, Courtenay requested a transfer to the Pacific theatre, since the Navy's role in Europe had essentially ended. He was on the HMS London, after going through Suez, when the war in the Pacific ended.

He returned to Canada, early in 1946, and was accepted into the PhD program at U California/Berkeley, where he did a degree with Nobel laureate Emilio Segré. Mr. Segré sent him to Chicago to work with his own old friend, Enrico Fermi, director of the Manhattan Project. Courtenay spent the rest of his working life as a member of the University of Chicago faculty.

He did important advisory work for the U.S. Department of Defense as a member of Project Jason. His declassified paper on why it would be wrong to use nuclear weapons in Southeast Asia helped persuade Secretary McNamara not to use them there. Courtenay's naval service made up a short part of his long life, but it was a part that he valued extremely highly.