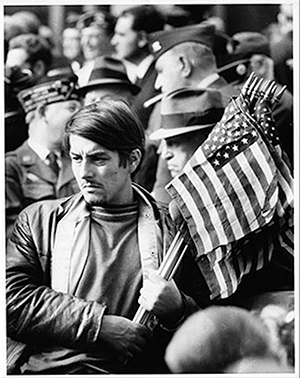 In Honor of Veterans Day

On November 11th, Americans gather to honor the country’s veterans and the sacrifices those veterans have made to preserve our country’s democracy, rights, and freedoms.

The barrage of bullets on the First World War’s western front concluded on Nov. 11, 1918, at “the eleventh hour on the 11th day of the 11 month” when the armistice known as The Treaty of Versailles went into effect. After four years of brutal fighting, an eerier stillness cut across the battlefields of Europe. The next day, Field Marshal Ferdinand Foch sent a message to the Allied Armies that read, “You have won the greatest battle in history and served the most sacred cause – the Liberty of the World.”

Rejoicing the end of the war quickly transformed into a phase of remembrance for all of those who were lost. In just 150 days of climactic fighting, more than 100,000 American troops lost their lives – roughly half being killed in combat, while a large percentage of the rest succumbed to influenza. In addition, more than 200,000 troops were wounded on the battlefield. It was a heavy price to pay, but America had helped to win a great and terrible war.

Armistice Day, officially recognized by President Woodrow Wilson in 1919, is still observed throughout the world – many pause for a moment of silence at the 11th hour of this day to honor those who put an end to this “Great War.” In November of 1919, President Wilson is famously quoted saying, "To us in America, the reflections of Armistice Day will be filled with solemn pride in the heroism of those who died in the country’s service and with gratitude for the victory, both because of the thing from which it has freed us and because of the opportunity it has given America to show her sympathy with peace and justice in the councils of the nations…"

Referred to as Remembrance Day in many countries, the red poppy is commonly worn as it remains the symbol of commemoration – originating from Lt. Col. McCrae’s poem “In Flanders Fields.” The first Armistice Day included parades and other events to celebrate the return of American soldiers from the battlefields in Europe, Africa, and Asia.

In 1954, after the return from World War II and the Korean War, President Eisenhower rededicated the day as Veterans Day and encouraged Americans to commit themselves to the cause of peace and to honor America’s veterans for their bravery, integrity, patriotism, and sacrifice. In keeping with this directive, each year on November 11th, we pause to remember and honor those service members who have served in both peace and wartime with parades, solemn ceremonies, the ringing of bells, and other events.

And this year, at the Pritzker Military Museum & Library, we invite you to join us in celebrating! To commemorate the day, we’re celebrating the centennial of The Tomb of an Unknown Soldier, a historic monument dedicated to deceased U.S. service members whose remains have not been identified. The Tomb’s history, meaning, and story are detailed in an episode of the Museum & Library’s hit series Pritzker Military Presents with author, Patrick K. O'Donnell, an can be viewed here.

Additionally, please stop by the Museum & Library for free admission on November 11th and take advantage of our shop sale, both in person and online, from the 11th to 14th. We’re also excited to be hosting a livestreamed program on YouTube in celebration of the holiday, please tune in here at 5:30pm CST.

Learn more about Veterans Day and its history with help from these books on the Armistice:

Sanford, A. P, and Robert Haven Schauffler, eds. Armistice Day: An Anthology of the Best Prose and Verse on Patriotism, the Great War, the Armistice--Its History, Observance, Spirit and Significance; Victory, the Unknown Soldier and His Brothers, and Peace. with Fiction, Drama, Pageantry and Programs for Armistice Day Observance. Our American Holidays. New York: Dodd, Mead and Company, 1927.