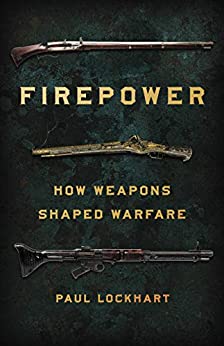 Paul Lockhart’s Firepower: How Weapons Shaped Warfare is magisterial in its scope. Starting with the Middle Ages and ending in the twentieth century, the author traces the technological development of chemical-based, projectile-firing weaponry as well as the platforms that carried them – including humans, horse-drawn carriages, ships, and self-propelled vehicles on land, sea, and air. But beyond the technologies themselves, Lockhart also examines the challenges of employing them from the standpoint of military organization. Moreover, he also considers the broader consequences of weapons development upon the evolving system of Western states, particularly with respect to financing and the increasing centralization of power over time. From the details of matchlock firing mechanisms to treatments of varying aspects of arms races prior to World War I, the book offers insights from multiple levels of historical analysis. What readers will not find are prolonged discussions of particular wars or campaigns. Lockhart offers a few concise examinations of specific battles, such as the 1522 Battle of Bicoccia, and the 1864 Battle of Lundby, chosen because of their capacity to demonstrate the evolution of weapons technology. But the nature of that evolution, with respect to particular types of weapons and platforms (infantry weapons, artillery, ship design, etc.) is the focus of most individual chapters.

These are organized into four “books,” based on chronology: from 1300 to 1800 (“The Gunpowder Revolution”); 1800-1870 (“The Age of Revolutions”); 1870-1918 (“The Revolution in Firepower); and 1918-1945 (“The Twilight of Firepower”). Each of these divisions reflects the predominant technologies that that shaped military firearms design in those periods. From the Middle Ages to the end of the eighteenth century, for example, those would have been smoothbore muzzleloading artillery and small arms – with the latter evolving to using matchlock and then flintlock firing mechanisms. The pace of technological change picked up in the early and middle parts of the nineteenth century, driven in part by the development of engineering as a discipline. This period saw design driven by efforts to expand the use of rifling and breechloading, alternative firing systems, explosive artillery projectiles, and for naval platforms the first uses of steam propulsion, armor, and turreted guns.

These trends continued after 1870, when the pace of change accelerated further, driven in part by intense competition among Western states. With advances in metallurgy and chemistry, by 1914 the armies of those countries possessed highly accurate magazine-fed, bolt-action breeching loading rifles firing jacketed ammunition, as well as the first full-automatic machine guns and quick-firing artillery; while naval design had produced both all-big gun armored battleships, small vessels that also used self-propelled torpedoes, and submarines. Dramatic increases in firepower made tactical, offensive movement incredible challenging in the First World War, driving both efforts to develop combined arms tactics as well new weapons development such as efforts to generate more portable automatic firepower for infantry, and the first use of self-propelled armored vehicles for land combat. The various uses of airpower quickly became apparent during the conflict, with belligerents developing aircraft for various functions based on early technologies; conversely, the big surface fleets built before the war saw relatively little use, with naval operations driven mostly by submarines and efforts to combat them. After 1918 weapons development – now constrained by postwar budgets – sought to better achieve the capacities of arms introduced at the end of the world war: portable automatic weapons, more mobile and better armed vehicles, more effective aircraft; and while navies still focused on ships with big guns, World War II soon made apparent to importance of naval air capabilities, particularly aircraft carriers, while reinforcing the importance of submarines.

Beyond weapons development per se, Lockhart offers perceptive insights as to the broader impact of these technological changes. One is how they explain the evolution of modern military forces, including both training and organization. Firearms posed the challenge of what tactical formation would best integrate these weapons with preexisting ones in combat environments – one made easier by the advent of the bayonet, which obviated the need for a pikemen as a distinct type of infantry – and later, how those formations should evolve along with firearms and related technologies. Lockhart also draws our attention the issue of cost, noting that in various periods of European history, the development and fielding of new firearms favored the biggest, largest, most centralized states (the ones that generate the greatest revenues from taxation). Perhaps what is most impressive is his command of the scholarship. Hundreds if not thousands of books address particular topics encompassed by his analysis, particularly given its broad temporal scope. Yet Lockhart has managed to synthesize their most salient ideas, select and present the most important of myriad technical details, all while providing an engaging and insightful narrative.

As comprehensive and encompassing as it is, there are some historical developments and points that are not addressed, or could have received more attention. In places the analysis might have benefitted from a more thorough discussion of tactical debates engendered by weapons’ innovation, such as ideas prior to 1914 that emphasized the importance of morale for tactical movement sometimes dubbed the “spirit of the offensive” or “offense a outrance.” But perhaps the most appropriate caution with respect to the book is that its focus on weapons lends itself to an emphasis on the role of technology in producing historical change. The historiographical term for this concept is “technological determinism”: Lockhart is careful to reject this simple idea of causation, and argues more conservatively that weapons development helped “to effect the transition of the European states into the modern age” (p. 126). The issue is rather that the focus on weapons does not leave room for a rigorous treatment of other factors that intersected with technology to generate change. For example, Lockhart discusses the concept of the Military Revolution, first promulgated by Michael Roberts in the mid-twentieth century, which argued that the advent of gunpowder weapons led to tactical and organizational changes that stimulated the need for larger armies, which in turn catalyzed the birth of modern centralized European states – usually regarded as a technologically determinist argument. And while Lockhart notes various critiques of it, he does not address those which claim that it was administrative and bureaucratic developments that allowed modern states to build the larger armies that could better exploit the new weapons technology, rather than the other way around.

This is a point worth pondering when considering the Western orientation of his book. In other regions of the world that possessed them, the development of gunpowder weapons were not as integral to the security large states or empires in other regions of world (and actually banned in Japan for hundreds of years) which did face the same type of intense, persistent political competition as in Europe in the early modern period. Moreover, “great power” competition since the end of World War II continues to emphasize the development of new weapon technologies, but now ones other than firearms: missiles, electronic communications and detection, cyber weapons, drones and drone swarms, etc. Lockhart certainly proves his point that firearms were crucial for the unfolding of Western history, but how much it drove that history, as opposed to it simply being the most promising weapons technology available in a region and period of intense political competition, remains in question.

With that caveat in mind, anyone with an interest in military history, in technology, or broad historical questions is encouraged to read Firepower. For members of the Pritzker Military Museum & Library, and others seeking to learn about the nature of service, Lockhart’s book offers a powerful perspective on how technology has altered the nature of the military experience over time. It is a highly recommended addition for anyone’s collection of historical works.

This Historian's Perspective has been submitted by Dr. Matthew S. Muehlbauer, the Chief Military Historian at the Pritzker Military Museum & Library.