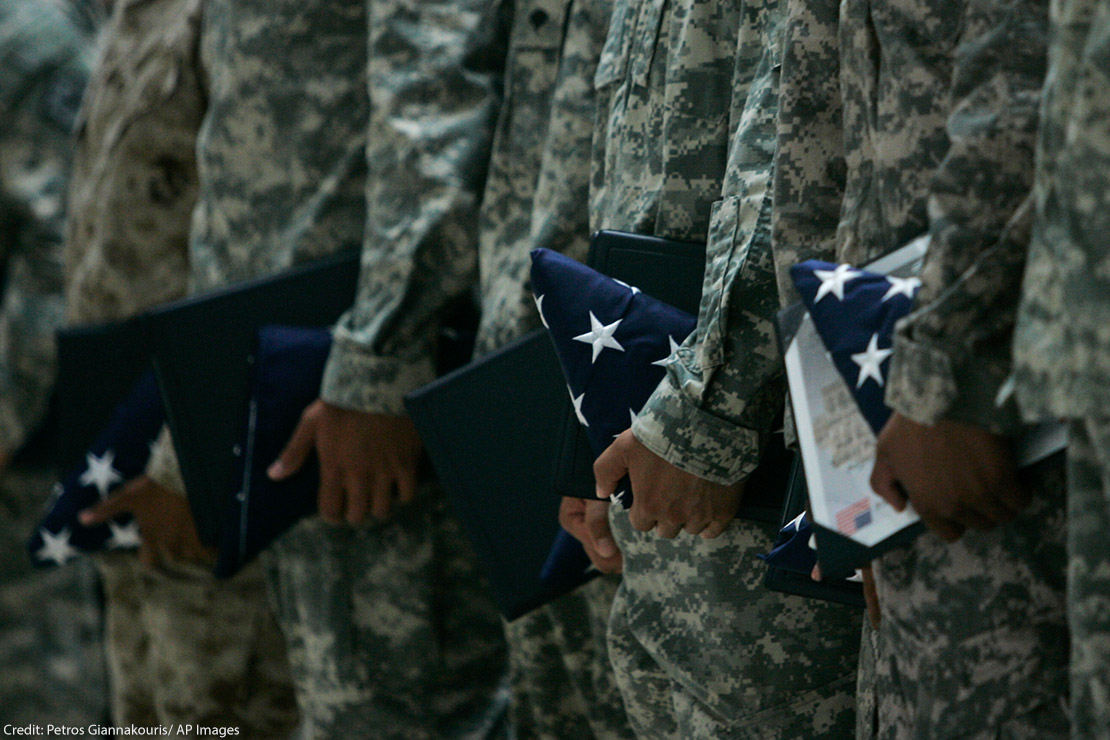 This month the Pritkzer Military Museum & Library begins a 3-part blog series addressing issues of inclusion and diversity in America’s armed forces.  Our first author is Scarlet Kim, who discusses the role of immigrant soldiers and recent challenges they face obtaining citizenship.  Upcoming posts will address the contributions and experiences of Black service members (for Black History month in February) and female service members (Women’s History month in March).

In his 1963 “Letter from a Birmingham Jail,” Dr. Martin Luther King Jr. wrote that “[w]e are caught in an inescapable network of mutuality, tied in a single garment of destiny” and that “[a]nyone who lives inside the United States can never be considered an outsider.” Dr. King was specifically addressing the charge that he was an “outside agitator” who had come to Birmingham to stir up trouble. However, Dr. King’s words also reflect a broader vision of inclusivity — that all who come to this country immediately form part of its fabric.

The “single garment” of America that Dr. King spoke of is knit together by the contributions of generations of immigrants. The United States military is no exception. Immigrants have enlisted in the military in large numbers throughout our nation’s history, serving in the Revolutionary War and in every major conflict since the founding of the republic. Between 2011 and 2015, for example, an average of about 10,000 non-citizens served in the U.S. Army per year. The Department of Defense estimates that approximately 7,000 green card holders enlist in the military every year. And between 2008 and 2016, the Department of Defense recruited an additional 10,400 foreign nationals present in the U.S. without green cards because they possessed skills, such as medical or linguistic expertise, considered critical to military readiness.

From the War of 1812 to the present, Congress has recognized the vital role immigrants play in the nation’s military by promising them an expedited path to citizenship. Since 1952, that promise has been reflected in the Immigration and Nationality Act, which provides that any non-citizen who has served honorably in the U.S. military during a period of armed conflict may naturalize, regardless of their immigration status or length of residence in the United States. Since 9/11, over 100,000 immigrants have taken advantage of this expedited path to citizenship to naturalize on the basis of their military service.

In 2017, the government implemented a radical new policy, which suddenly deprived thousands of immigrant service members the path to citizenship promised to them by Congress and that they have earned through honorable military service. This new policy required service members to meet onerous new requirements, including serving a minimum period of time, before the military would issue the administrative documents attesting to the honorable service necessary for them to seek citizenship. For hundreds of years, non-citizens serving during wartime could naturalize almost immediately upon entering service; under the new policy, they had to wait many months, typically long after they had deployed to their duty stations.

In April 2020, the ACLU filed a class action lawsuit on behalf of thousands of immigrants whose service in the U.S. military entitles them to naturalize expeditiously, but who were blocked from doing so by the 2017 policy. Four months later, the U.S. District Court for the District of Columbia struck down portions of the policy. The court found that the policy’s minimum service requirement violated federal law and was “arbitrary and capricious” for upending decades of prior military practice without any valid rationale.

Unfortunately, more than a year later, service members continue to report that the military is not following the court’s order. Instead, it is forcing them to wait long periods of time for the administrative documents necessary for them to apply for naturalization. In August 2021, we returned to court to ensure our government’s compliance with the law. We described how military officials have refused, for months, to comply with the court’s order. We asked the court to demand an explanation from the Department of Defense and order it to take specific steps to meaningfully implement its order and federal law. We are currently awaiting the court’s decision.

In the meantime, thousands of immigrants continue to serve in the U.S. military without enjoying the privileges afforded to U.S. citizens. These service members cannot vote, travel with a U.S. passport (even while deployed abroad), or sponsor immediate family members. Nor can they access meaningful professional advancement opportunities within the military since so many roles, including more specialized positions that may suit their skill sets, are only available to U.S. citizens. On top of it all, service members who fall out of lawful immigration status while awaiting citizenship are vulnerable to placement in removal proceedings and deportation, notwithstanding their ongoing military service.

Immigrants who have chosen to serve in the U.S. military are a powerful representation of Dr. King’s observation that we are bound together “in an inescapable network of mutuality.” Congress has rightly recognized that their service and sacrifice should be rewarded with an expedited path to citizenship. It is far past time that they receive it.

This blog has been contributed by Scarlet Kim on behalf of the ACLU. Scarlet Kim is a staff attorney with the ACLU’s National Security Project. Prior to joining the ACLU, Scarlet worked as a legal officer at Privacy International, an associate legal adviser at the International Criminal Court, and a Gruber Fellow in Global Justice at the New York Civil Liberties Union. She also served as a law clerk for the Hon. John Gleeson of the U.S. District Court for the Eastern District of New York. She is a graduate of Yale College and Yale Law School.