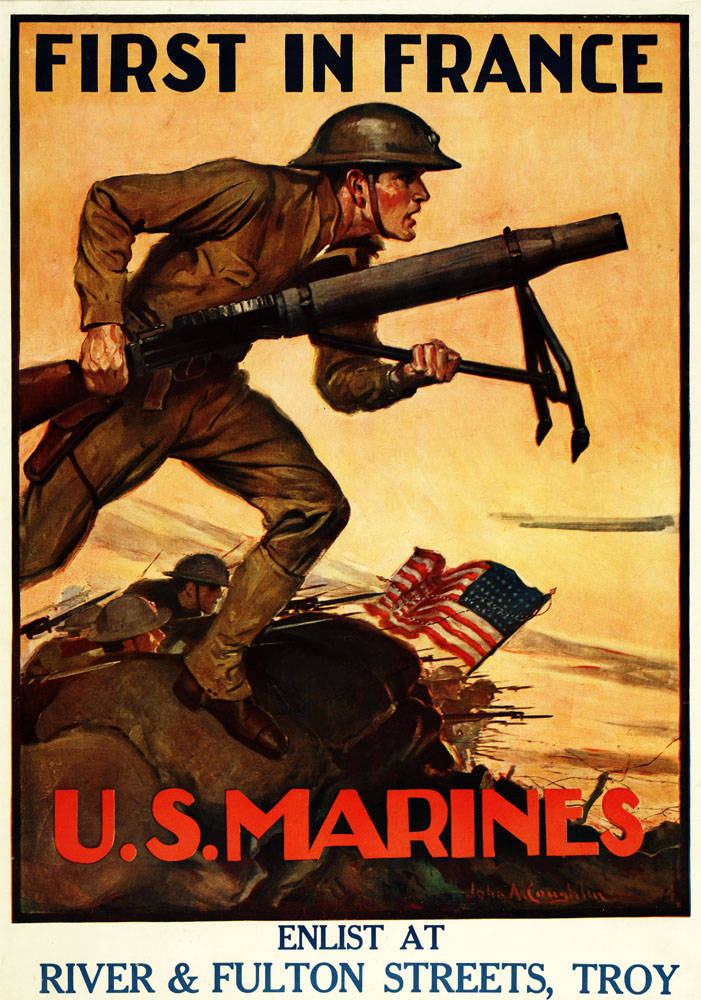 The Museum & Library wishes a very special happy birthday to all current and retired members of the United States Marine Corps!

The United States Marine Corps was founded on November 10, 1775, as the Continental Marines, and participated in some important battles throughout the American Revolution, including the Battle of Princeton on January 3, 1777. Due to funding issues, the Marine Corps was disbanded as an economical measure at the end of the Revolution.

Congress re-instituted the branch as the United States Marine Corps on July 11, 1798. During this period of their history, the Marines protected shipping from the Barbary pirates who were attacking American vessels in the Atlantic Ocean and the Mediterranean Sea.

During World War I, the United States Marines fought against the Germans in the Battle of Belleau Wood. On June 1, 1918, the Germans punched a hole in the French lines, just left of the Marines position, that allowed Marines marching at night with the United States Army’s 23rd Infantry Regiment to fill the gap. The next day, the American forces were holding 12 miles of the front line. Army General James Harbord countermanded a French order and told the Marines, “to hold where they stand.”

The Marines used their bayonets to carve out fighting positions which would allow them to fire from a prone position and waited for the Germans to come within 100 yards. Once within range, they fired on the German units forcing them to retreat with heavy casualties. The Marines were discouraged from taking the attack forward by retreating French forces, which prompted the famous retort from Captain Lloyd L. Williams of the 5th Marines, “Retreat? Hell, we just got here.” This phrase has since also been attributed to Major Frederic Wise. Regardless of who said it, the Marines have since incorporated this bit of lore into their warfighting ethos.

During World War II, the Marines island-hopped through the Pacific as they took back islands that had been captured by Japanese forces. In the two decades leading up to World War II, the Marine Corps worked to develop the doctrine, equipment, and organization needed for amphibious warfare. Their improvements in this effort were proven in Guadalcanal, Bougainville, Tarawa, New Britain, Kwajalein, Eniwetok, Saipan, Guam, Tinian, Peleliu, Iwo Jima, and of course - Okinawa. 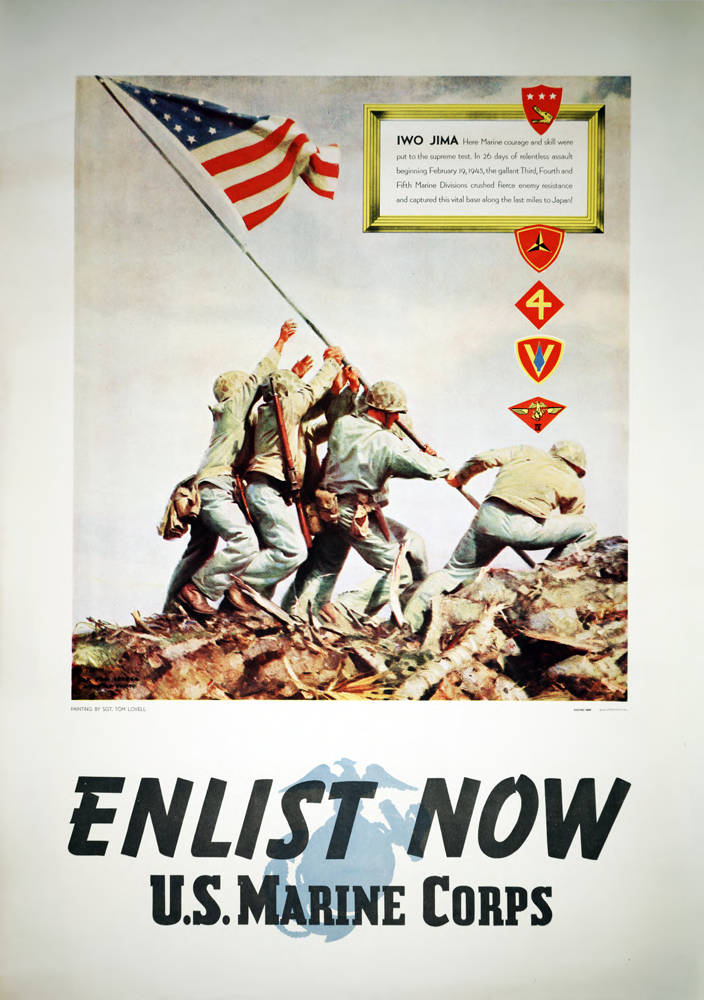 It was also in World War II that the Marines became known for their superior skills in jungle warfare. An example of the Marine Corps valor and resilience can be found in the actions of Hershel "Woody" Williams, a warrant officer, who received the Medal of Honor for his actions at the Battle of Iwo Jima. His medal and citation are on display at the Museum & Library in our permanent Medal of Honor exhibit. By the end of WWII in 1945, the Marine Corps included six divisions, five air wings, and enough troops to support each of those divisions and wings. The strength of the USMC peaked at more than 485,000 Marines in World War II; 82 of these soldiers received the Medal of Honor for their actions during the conflict.

The Marines also played a pivotal role in the Vietnam War. Their involvement began in August 1954 with the arrival of a liaison officer in the then-newly established United States Military Assistance and Advisory Group to the Republic of Vietnam. For years, Marine activity in Vietnam consisted of advisory and staff responsibilities. Those responsibilities shifted in mid-April of 1962 when Marine Medium Helicopter Squadron 362 (HMM-362), deployed to South Vietnam to support to the South Vietnamese army.

Eventually, Marine Detachment, Advisory Team One, arrived to collect intelligence, representing the first Marine ground unit to arrive in the country. From here, Marine commitment expanded further and a buildup of forces ensued. Marines engaged in their first major offensives against the Viet Cong, code named Operation Starlite, in August 1965. The following year, the number of Marines in the Republic of Vietnam grew to nearly 70,000 Marines.

1968 was a decisive year for the Marines in Vietnam and marked a turning point for the war in Vietnam. The communists launched a massive offensive against 105 cities and towns throughout South Vietnam. Marine and South Vietnamese forces repelled all the attacks except at Hue. It took 26 days of house-to-house fighting to effectively remove all North Vietnamese forces from the city. Shortly after, fighting ensued in Khe Sanh, where for 77 days the 26th Marines held the embattled base against the intense pressure of 1,000 shells a day being hurled upon their position by the North Vietnamese. Marine resilience and U.S. air power reigned supreme, inflicting heavy losses upon the enemy, resulting in the siege being broken.

It’s no secret that the Marines are an elite fighting force. They have most recently seen extensive combat in the Iraq War and the War in Afghanistan, especially in the notorious Helmand Province of Afghanistan.

The Marine Corps played a key role from the very beginning of Operation Desert Storm, following Iraqi forces’ invasion of Kuwait in 1990. Because 45,000 Marines were already deployed in vicinity of the Persian Gulf at the onset of the Gulf War’s Operation Desert Shield, the Corps were immediately able to commit thousands of Marines to Operation Desert Storm when called upon in January of 1991.

Marines saw heavy ground fighting as operations were launched and quickly kicked off the final assault of the operation just a month later. During this final assault, Marines positioned themselves in the Gulf to create the illusion of an amphibious raid, allowing time for allied forces to attack the Iraqi forces from behind. After 100 hours of brutal fighting, the assault ended, and the allied forces had succeeded. Two days later, on February 28, 1991, former President Bush declared a cease-fire.

The Marine Corps’ also saw extensive battle in Afghanistan, beginning with the 2001 invasion that quickly led to a task force of 1,000 Marines being sent to the Helmand Province. They faced light resistance as they secured Camp Rhino — a desert air strip in the Garmsir district of Helmand — and the Kandahar airport. Having deployed from ships off the coast of Pakistan, this made history for being the longest amphibious assault in the Corps’ history.

These actions initiated a series of events. The Taliban government quickly fell resulting in al-Qaeda’s leader, Osama bin Laden, living on the run across Pakistan, until his eventual demise at the hands of Navy SEALs. International troops remained in the region as the U.S. military became bogged down by prolonged warfare in Iraq which led to a Taliban resurgence and Marines being sent back to Helmand in 2008.

Around the same time, the Marines became heavily involved in the fight for Sangin. Marines from 3rd Battalion, 5th Marines were sent in to provide security, overwatch, and conduct counter-insurgency operations. This group fought in the very dangerous Sangin district, which is notorious for being one of the central locations of the country's opium trade. Here, Marines suffered the highest number of casualties in the war. Since then, the Marines have fought hard battles against the Taliban; especially in 2010 and 2011. They eventually pulled out in May 2014 as part of a larger withdrawal from Afghanistan by U.S. forces. The service members involved in these operations and battles are recognized for their sharp shooting skills, marksmanship, ability to push forward, and skillful amphibious landings.

The Marines’ Hymn, the official song of the United States Marine Corps, pays tribute to the service’s history and resilient spirit:

From the Halls of Montezuma
To the shores of Tripoli;
We fight our country's battles
In the air, on land, and sea;
First to fight for right and freedom
And to keep our honor clean;
We are proud to claim the title
Of United States Marine.

Our flag's unfurled to every breeze
From dawn to setting sun;
We have fought in ev'ry clime and place
Where we could take a gun;
In the snow of far-off Northern lands
And in sunny tropic scenes;
You will find us always on the job
The United States Marines.

Here's health to you and to our Corps
Which we are proud to serve;
In many a strife we've fought for life
And never lost our nerve;
If the Army and the Navy
Ever look on Heaven's scenes;
They will find the streets are guarded
By United States Marines.

This year, as we celebrate the birthday of our Marine Corps, we hope everyone finds time to reflect on the sacrifice and service of our armed forces.

Here's health to all Marines!  Thank you for your service!

Learn more about the United States Marine Corps by reading:

Devaney, David K. They Were Heroes: A Sergeant Major's Tribute to the Combat Marines of Iraq and Afghanistan. Annapolis, Maryland: Naval Institute Press, 2015.

Krulak, Victor H. First to Fight: An Inside View of the U. S. Marine Corps. Annapolis, Md.: Naval Institute Press, 1984.

Inchon Landings of the Korean War