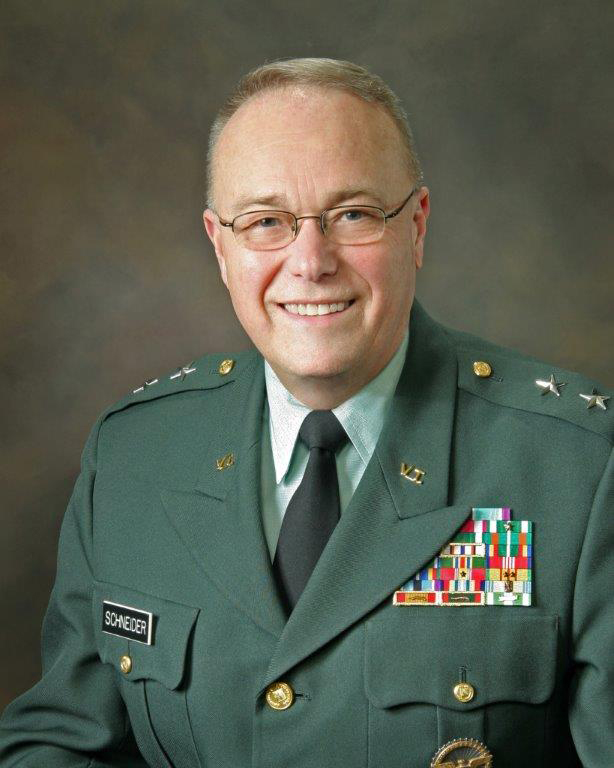 Pritzker Military Museum & Library is proud to announce that Dr. Richard W. Schneider will be the recipient of the Pritzker Military Museum & Library’s 2021 Citizen Soldier Award. The award will be presented when Dr. Schneider is honored at the  2021 Liberty Gala, to be held on October 21. This annual event is the non-profit’s main fundraiser each year.

The Citizen Soldier Award stands to honor a person who exemplifies the traditions of the citizen soldier set by George Washington; a person who served the nation as a leader in war and in peace, for the betterment of the common good. Dr. Schneider personifies these qualities through both his service in the military and his achievements on the home front.

“Dr. Schneider led Norwich University honorably and furthered the development of the citizen soldier,” stated Susan Rifkin, Chief Operating Officer of Philanthropic Activities. “His tenure and dedication to sacrifice and service, both at this higher education institution, which is the birthplace of the Reserve Officers’ Training Corps (ROTC), and as a member of the military community, showcases his embodiment of the citizen soldier ideals - duty, sacrifice, service before self, courage, and patriotism. We are proud to honor his legacy and achievements.”

Now in its second year, the Citizen Soldier Award is bestowed upon a person who has lived the mission of the citizen soldier. The recipient has a national or international reputation and has served in any branch of the U.S. Armed Forces, active, guard or reserves, and is either active or honorably discharged. The honoree also displays a commitment to non-partisan issues and demonstrates the ability to bridge political divides. The Citizen Soldier Award recipient is selected by a committee comprised of members of the Board of Directors and non-Board volunteers of the Pritzker Military Museum & Library, and by Colonel (IL) Jennifer N. Pritzker, IL ARNG (Retired), Chair and Founder of the Museum & Library.

“Through the years, my work at Norwich University has aligned with the ideals and mission of the Pritzker Military Museum & Library,” stated Dr. Schneider. “I am pleased, humbled and honored by this recognition of my efforts and contributions to bettering society’s understanding of the values of the citizen soldier and in commissioning thousands of future officers to serve our nation.”

He became the 23rd President of Norwich University in 1992, serving in the position for 28 years. Under his leadership, Norwich University grew annual enrollment 62%, established five institutes and centers of excellence, raised $272 million over five campaigns, built or renovated 97% of all academic space, and prepared thousands of students to become leaders in the military and civilian fields. Four of its colleges now offer 39 different undergraduate majors, six of those degree completion programs are now offered online. In 2020, after 28 years as President, he retired from Norwich University and currently serves as President Emeritus.

“In advancing the promises of the next generation of the citizen soldier, Dr. Schneider has stood with us as a dedicated partner,” stated Pritzker Military Museum & Library Founder, Colonel (IL) Jennifer N. Pritzker, IL ARNG (Retired). “His commitment to the principles of sacrifice and service, both in himself as well as in the next generation, showcases why he truly deserves the Citizen Soldier Award.”

The 2021 Liberty Gala, to be held on October 21 at 6 p.m., will celebrate the work of the Pritzker Military Museum & Library, and honor the service and stories of the U.S. Armed Forces’ citizen soldiers, past and present. This year, the hybrid event will be hosted at the Museum & Library and feature in-person, virtual, and video segments. The 2020 inaugural recipient of the Citizen Soldier Award was Senator Bob Dole.