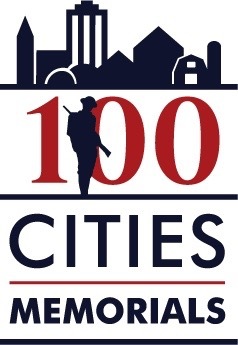 A partnership between the Pritzker Military Museum & Library and the United States World War One Centennial Commission, with support from the American Legion and Veterans of Foreign Wars, 100 Cities/100 Memorials is a fund-matching program to restore World War I memorials and name 100 official WWI Centennial Memorials across America.

Through 100 Cities/100 Memorials, 100 matching grants of up to $2,000 will be awarded for the restoration and preservation of World War I memorials in towns and cities across the United States. Any municipal government, individual, or organization is eligible to apply.

After the Great War ended in 1918, its memorialization took place on a very local level. Across the United States, many of the memorials to The Great War or The World War, as it was then called, were created by friends, families, and fellow citizens who sought to honor those that served in the war and memorialize those who did not return home.

This program seeks to foster a sense of heritage in local communities, to recognize local stories and people who were involved in the war, and create a way for community members to directly participate in the national World War One Centennial.The program is well-suited for community-service projects hosted by school groups, scout troops, veteran group posts, historical/cultural organizations, faith groups, local sports teams, and many other community groups in your area.

The Pritzker Military Museum & Library is the founding sponsor of the World War One Centennial Commission, dedicated to planning, developing and executing programs, projects and activities to educate, honor and commemorate the centennial of WWI.