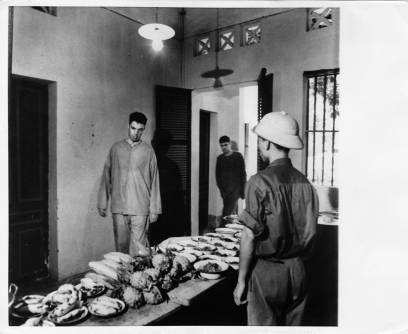 Somewhere in North Vietnam: Lunch "fit for a Vietnamese officer" is served to Maj. David Hatcher (left), U.S. Air Force, and Lt. (j.g.) David Rehmann, U.S. Navy, as they approach table in a prisoner of war camp near Hanoi. This photo, made by two East German photographers, is part of a cover story in the October 20th issue of Life Magazine showing American prisoners of war and their lives in Communist hands, and is one of the first views published in America on our captured servicemen.